Accounts of rape, burning children and murder How a Rohingya massacre unfolded at Tula Toli 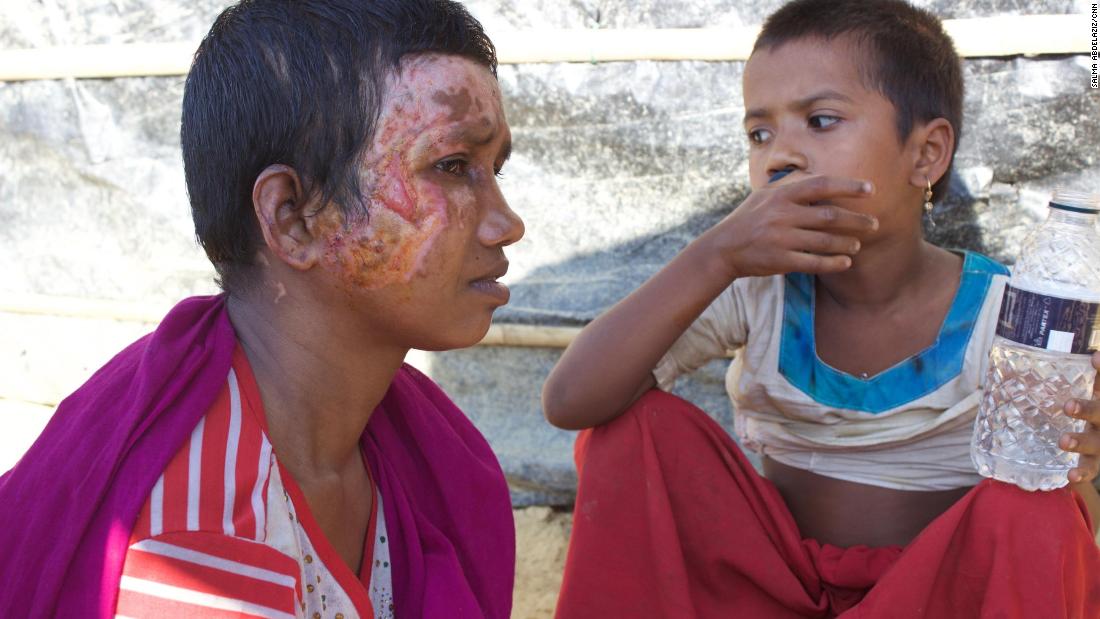 (CNN) Discarded and left for dead, Mumtaz says she found herself on top of a mound of charred, entangled bodies. “They killed and killed and piled the bodies up high. It was like cut bamboo,” says Mumtaz, a Rohingya woman from the village of Tula Toli in western Myanmar.

“In the pile there was someone’s neck, someone’s head, someone’s leg. I was able to come out, I don’t know how.” The horrors Mumtaz says she endured didn’t stop there. After escaping the mass grave, Mumtaz says she was dragged to a village house and raped by soldiers. The wooden house was then locked and set on fire.

It was her seven-year-old daughter Razia, who was in the hut, that ultimately saved her. “I called to my mum. And my mum said, ‘who are you?,'” Razia says. “My mother’s head was split. She was thrown aside. They struck me and threw me aside.”

“I said ‘your finger is on fire.’ Then my mum and I got out and left.” The pair squeezed through a damaged part of a fence and hid in a vegetable patch, before other villagers found them and helped them get to Bangladesh, where a staggering 615,000 Rohingya refugees have fled since August 25, according to aid agencies.

The refugees have escaped violent clashes in the north of Rakhine State, where Myanmar’s military has intensified what it calls “clearance operations” targeting “terrorists” after Rohingya militants attacked police posts, killing 12 security officials.

The UN calls what’s happening in Rakhine a “textbook example of ethnic cleansing” and the killings that took place in Mumtaz’s village on August 30 have been described as one of the worst atrocities of the past two and a half months.

Shafiur Rahman, a Bangladeshi-British documentary maker, first heard about what occurred at Tula Toli after he filmed a group of Rohingya crossing the border between Myanmar and Bangladesh on September 2, three days after the killings.The dramatic footage shows dozens of men and women clambering across barbed wire fences into no man’s land, some of them covered in blood and carrying dead or injured relatives. Their distress is palpable.

“It quickly became clear to me that those telling me the most horrific accounts of their last few days were those coming from Tula Toli,” Rahman tells CNN. “And what also struck me was the consistency in their stories.” 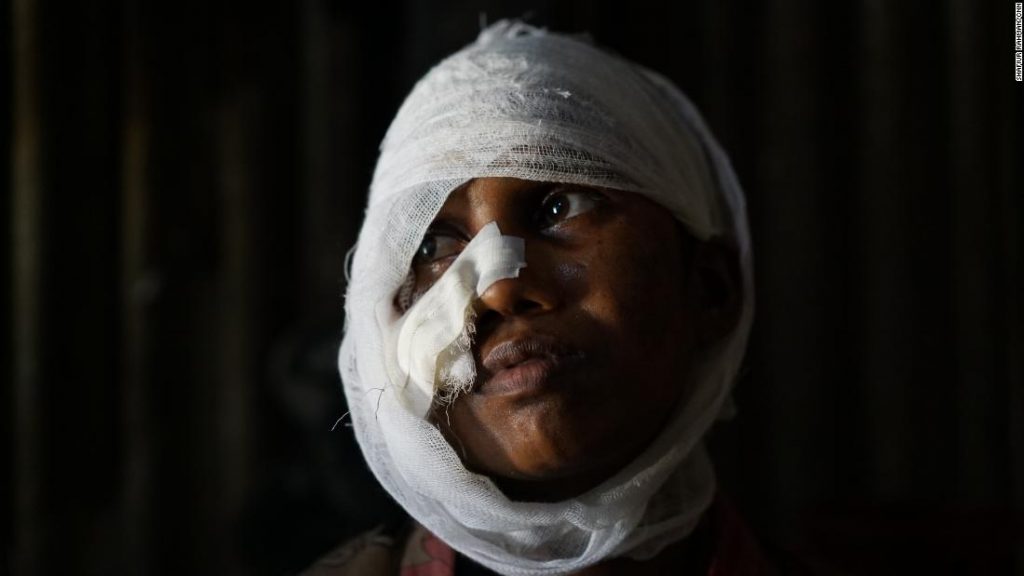 Mumtaz, photographed here on September 27, 2017, fled from Myanmar with her daughter.

He met Mumtaz and Razia in Bangladesh in late September. Almost mummified in bandages, Mumtaz had spent 15 days bed- bound in a clinic, unable to speak or even sip a glass of water. By mid-October, the horrific burns all over her face and body started to slowly heal, and Mumtaz began to share her story with Rahman in a series of interviews.

Accounts of mass rape, murder and arson have been given by many of the hundreds of thousands of Rohingya refugees who have escaped Myanmar. But the testimonies Rahman has collected from a total of 30 Tula Toli residents over the past two months, and detailed in this report depict what Amnesty International describes in an October report as “what appears to be one of the worst atrocities of the Army’s ethnic cleansing campaign.”

“Amnesty International believes, based on consistent, corroborating witness accounts, that soldiers massacred at least scores of Rohingya women, men, and children from Min Gyi on 30 August,” the Amnesty report concludes. Min Gyi is another name for Tula Toli. Amnesty also released satellite images showing the village before and after the houses were burnt. 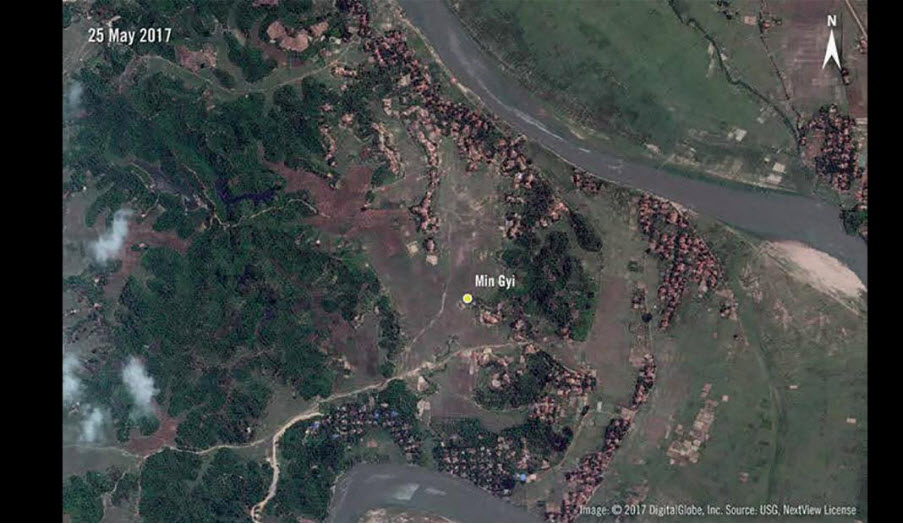 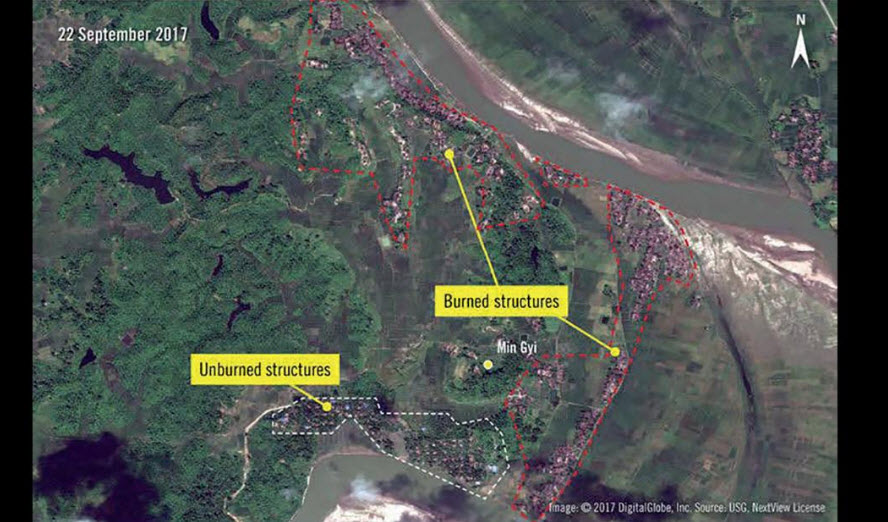 ‘They won’t kill anyone’

One of Myanmar’s poorest regions, Rakhine State is home to the mostly Muslim Rohingya and the Rakhines, a predominantly Buddhist ethnic group. The two have lived side by side in Tula Toli for generations although long-simmering tensions have often erupted into violence in the region. The estimated 1.1 million Rohingya have been denied citizenship in Myanmar, which regards them as Bengali. Bangladesh insists they are from Myanmar, rendering them effectively stateless.

In detailed video interviews and conversations, most of the 30 survivors told Rahman that they were given assurances by local officials that they would be safe if they remained in their village. 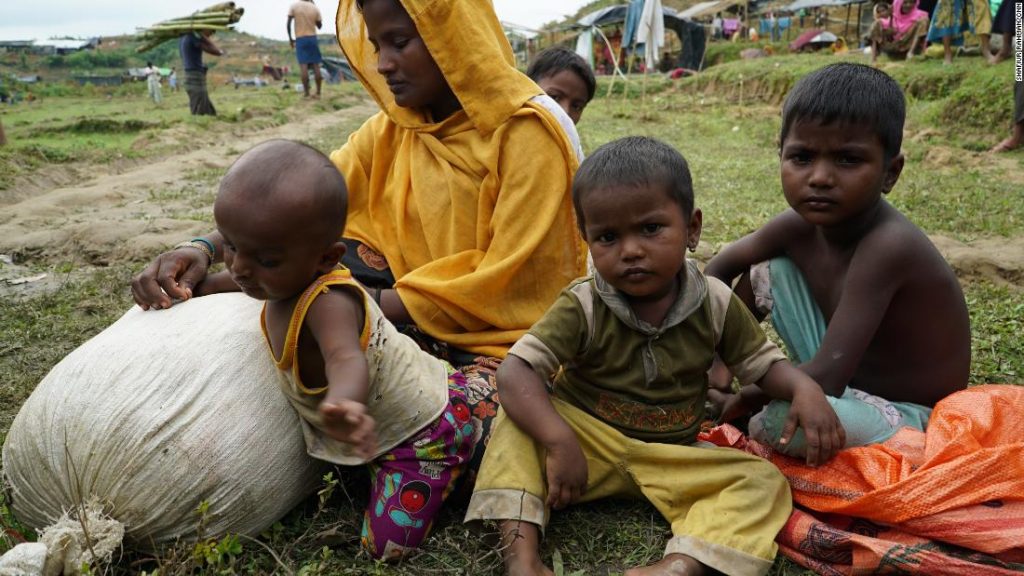 Rehana, photographed here on September 4, 2017, was able to flee from Tula Toli with her children

Mohammed Nasir said he was told: “They might torch the houses, but they won’t kill anyone.” Residents describe helicopters landing near the village at 8 a.m. on the morning of August 30. The soldiers were joined by around 50 Rakhine Buddhists and other non-Rohingya minorities from outside the village, survivors said.

“They asked us to gather on the beach,” Nasir says, describing the sandy bank of the meandering river that runs through Tula Toli. He saw the killings unfold from a hill. “When they saw people gathering, they went straight for them. They were shooting continuously, at the same time the houses were burning.

Cellphone footage shows Tula Toli residents heading to the river in their village on August 30, where witnesses say many were shot later that day.

Another resident, Rehana Begum, said she was also told to leave her home and stay near the river. “They kept us there by saying that they would do us no harm,” Begum says. “At 8 a.m., a helicopter landed and the village was besieged. Whoever was able to flee, they fled.” “(The military) surrounded us suddenly and we could not escape because of the river. The tide was high. There were no boats. Since my brothers could carry my children, I was able to swim and flee,” she says.

“Many were shot, scores got hit and they fell on their face,” Rehana said. “Those lying on the ground were picked up, chopped and later they were thrown into the river.”

Hasina, left, and her husband Shahidul on October 8. They say soldiers burned their one-year-old daughter alive.

Hasina, a Rohingya woman from Tula Toli, says the soldiers and their accomplices threw her one-year-old daughter Sohaifa on a fire while she was still alive. “They tore her from my arms,” Hasina says, breaking down into tears. “They threw her into a burning pile of clothes. They had started a fire using people’s belongings. And they threw her into the big burning pile.” Her husband had been working outside the village when the killings took place and later reunited with his wife in Bangladesh, where he found out about the death of their only child.

CNN cannot verify the accounts of the refugees, as access to Rakhine State is heavily restricted. 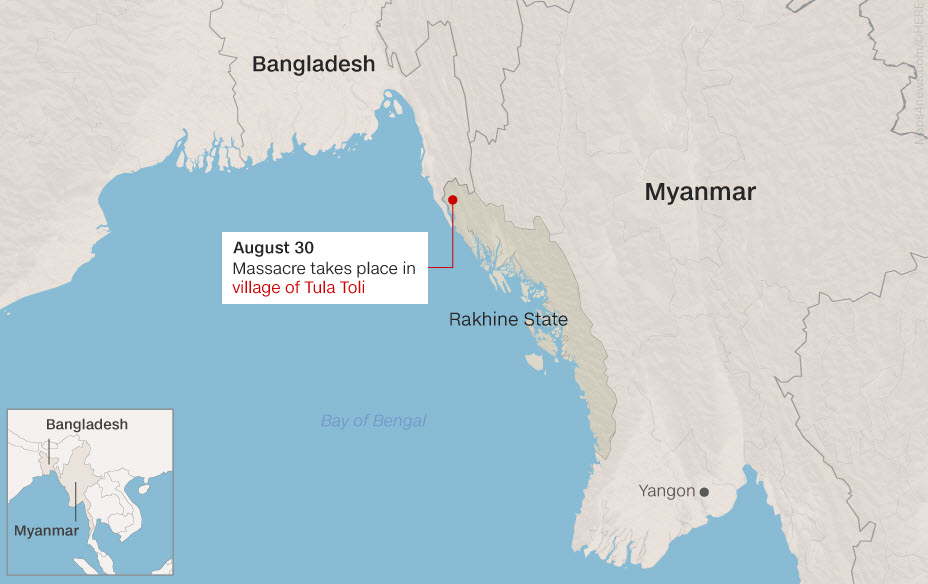 More than a week before the attack on the village, Rohingya village officials say there was a meeting on August 18, in which both Rakhine Buddhists and Rohingya Muslims from Tula Toli signed a peace agreement. While the village, which is home to 4,360 Rohingya and 435 Rakhines, hadn’t seen any clashes in recent years, Rakhine officials said they wanted to allay Rohingya fears given tensions between the two groups elsewhere in the state and a recent military build up, the survivors told Rahman.

“A resolution was passed to not attack each other and live peacefully. It was signed by both sides, Rakhine and us,” said Nur Kabir, the current secretary of Tula Toli’s village administration, who is now in Bangladesh. 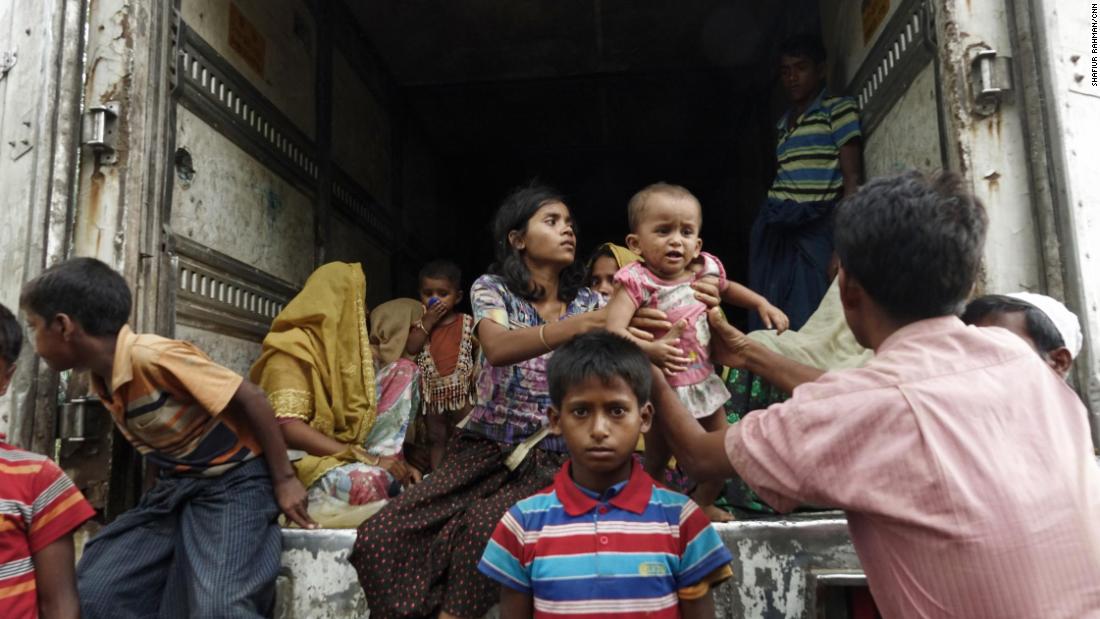 A group of Rohingya refugees from Tula Toli being brought from the border to the refugee camps in Bangladesh on September 2, 2017

“But they attacked on Wednesday starting at 8 a.m. and killed us.” The survivors say their trust in that peace agreement signed days before, and in the village authorities, was obliterated when the military arrived early on the morning of August 30. Those who escaped estimate that between 1,500 to 1,700 people died that day.

Rahman believes, given the instructions of local officials, the peace deal and the military build-up in the area before August 25, that the attack on Tula Toli was pre-planned. He calls it a “terrifying and inescapable notion” that undermines the repeated insistence from Myanmar authorities that the military were responding to attacks from Rohinya insurgents.

Zaw Htay, the spokesperson for Myanmar’s de facto leader Aung San Suu Kyi, said that local Rakhines and the military had been targeted by insurgents in Tula Toli. “We could verify that on 30 August 2017 in Min Gyi (Tular Tuli) village, there were a total of eight attacks against Rakhine population and security forces by hundreds of terrorists,” Zaw Htay said. Previously, Myanmar’s government has denied charges of ethnic cleansing, saying that the military took “full measures to avoid collateral damage and the harming of innocent civilians” in Rakhine State.

In a televised speech on September 19, Suu Kyi, a Nobel peace prize laureate who took power in 2015 in a power-sharing agreement with the military, said she “condemned all human rights violations,” but failed to address alleged atrocities by the military.

She now faces increased scrutiny ahead of the visit of the US Secretary of State, Rex Tillerson, on Wednesday, who has said he is “extraordinarily concerned about the situation.”

Pope Francis, who has spoken out repeatedly in defense of the Rohingya, will also meet with Suu Kyi during a visit to Myanmar and Bangladesh later in November. 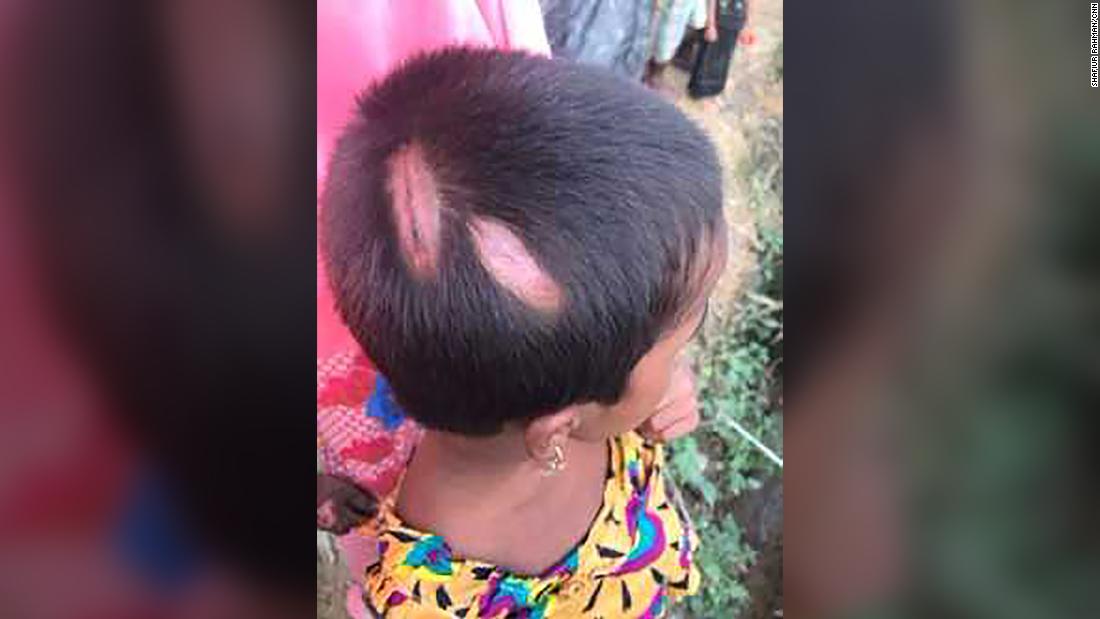 Seven-year-old Razia, who helped her mother Mumtaz to escape from Tula Toli. The rest of the family were killed in front of them. She suffered head injuries when her village was attacked.

Mumtaz is slowly recovering from her burns and other injuries in Bangladesh, but faces a desperate future. Conditions in the border camps are bleak, with aid agencies struggling to provide enough food, shelter and healthcare in what the UN has described as the world’s fastest growing refugee crisis and a major humanitarian emergency.

She and Razia now have only each other. In the carnage, Mumtaz says her husband was shot by the riverside. One of her three sons was thrown into a fire. The other two were killed in the wooden hut that Razia and Mumtaz escaped from.

“My brother and the others were burnt,” Razia says. “They were killed by being smashed. They shot dead my dad.” Razia’s head is scarred with the blows she received. But worse is the mental trauma of the memories, which are still raw. “She saw. The little girl saw everything,” Mumtaz says. “She tried to pick up her brother as he was burning. She couldn’t.”

Rohingya crisis: Not only ethnic cleansing, a clear-cut Genocide

Warning: curl_exec() has been disabled for security reasons in /home/unouyijq/public_html/wp-content/plugins/oauth-twitter-feed-for-developers/oauth/twitteroauth.php on line 226