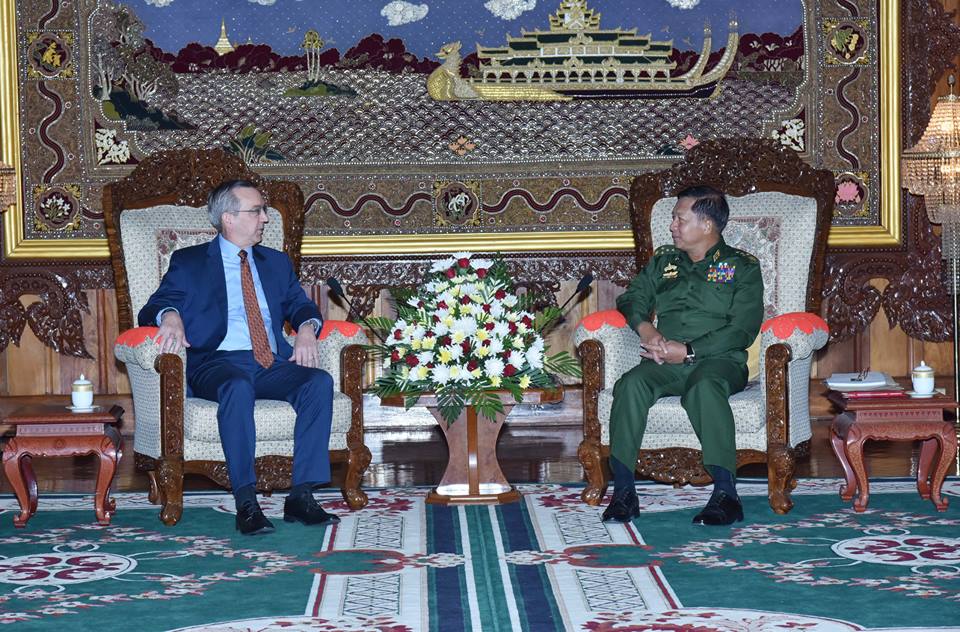 The hundreds of thousands of Rohingya have fled Myanmar’s Rakhine State to save their lives as Myanmar military has been committing atrocities against them; mass killing, burnt down almost ninety percent homes of the whole Rohingya community, gang rape, looting, arbitrarily arrest of innocent civilians, mass destruction and forcing them to leave on a false allegation that Rohingya are illegal immigrants from Bangladesh.

Senior General Min Aung Hlaing says ” Rohingya are not native of Rakhine.” It means “We are killing and driving them out of the country because they are not our nationals”.

The people now called Rohingya were brought into Rakhine as laborers in the 1800s when the region was administered by Britain, Senior General Min Aung Hlaing told U.S. ambassador Scot Alan Marciel at a meeting in Myanmar’s commercial capital Yangon.

Genocider Min Aung Hlaing knows well that the term “Rakhine” did not exist until 1974 when dictator Ne Win firstly established “Rakhine State” to make Buddhist Arkanese happy and persecute Rohingya who had rights to broadcast in indigenous Rohingya dialect until 1965.

Referring to the Rohingya as Bengalis, Min Aung Hlaing said “The Bengalis were taken into the country by the colonialists, they are not natives, the native place of Bengalis is Bengal. Therefore, they may have fled to the other country with the same language, race and culture as theirs by assuming they would be safer there.”

Any person who has common sense can interpret the statement of Min Aung Hlaing as follows:

“Rohingya was indigenous ethnic until 1965 when the term Rakhine did not exist in Burma. Regime changed the name of Rohingya deliberately to make them stateless. In 1990, military junta confiscated National Registration Cards of Rohingya and replaced them with White Cards to make them Bengali.

All my honorable followers! I wish to be safe all and help each other in during this hrad time facing pandemic. Per… https://t.co/5pyS7FkkC5

Reply Retweet Favorite
How can we save our lives from Covid-19 Read: https://t.co/tA9NBg4UT0