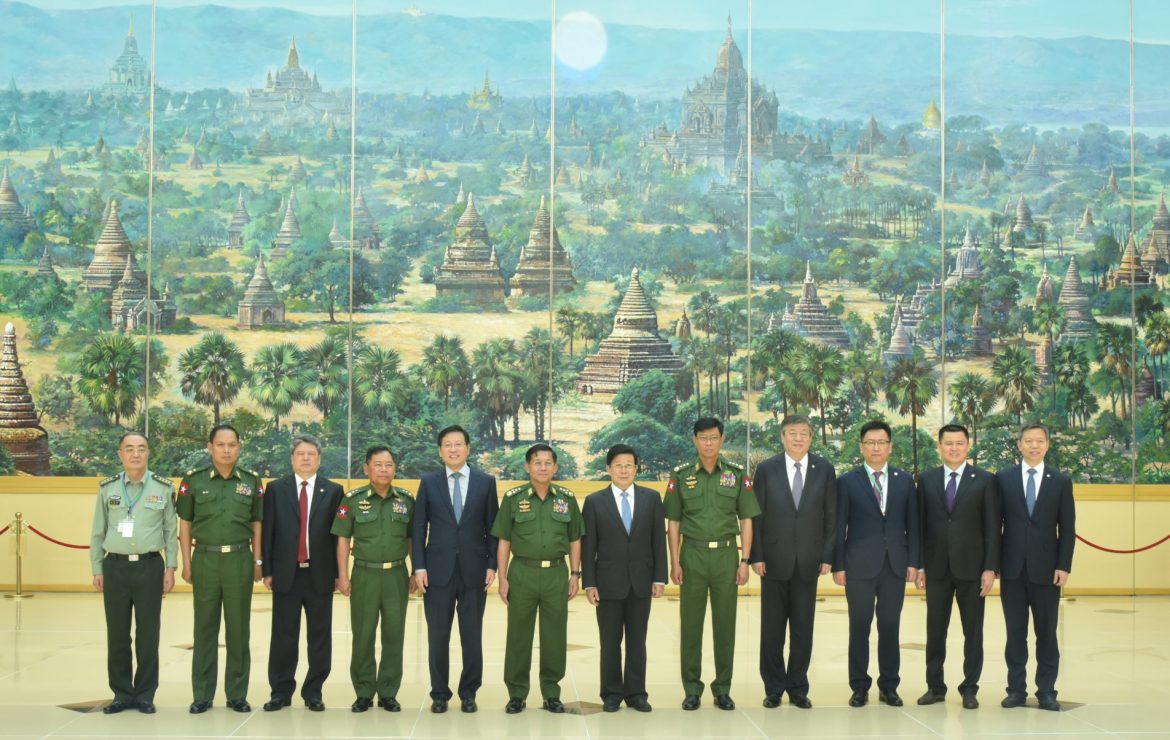 While UNSC delegation were trying to forget tears of rape victims and atrocities of Myanmar army from their memory after their return from refugee camps of Bangladesh, Commander-in-Chief Min Aung Hlaing received H.E Zhao Kezhi and Chinese delegation at Parlour of Zeyathiri to continue Rohingya Genocide on May 9, 2018. (Photo : Cincds)

The Rohingyas are victims of genocide that is perpetrated as a States policy of Myanmar back by selfish China to complete its projects including Golden Gas and Deep-Sea Port in Rakhine State of Myanmar. As in Burmese proverb “A master bears responsibility for his wayward charge and parents for their errant child”, China is fully responsible for the Rohingya Genocide.

We have written several times that there is no communal conflict in Rakhine State of Myanmar. All violence are State back crimes against us to complete Chinese projects in Rakhine State. When China started its projects in Rakhine in 2011, thousands of Rakhine ethnic protested against it. Later, Thein Sein government could successfully change protesters’ minds by spreading hatred against Rohingya and publishing the news that “Bengali Muslims are the most dangerous people who try to make an Islamic State in our land, Rakhine”.

“We have been facing the systematic use of the most brutal and dehumanizing forms of persecution and violence against us since 1970s. Along with the Chinese projects, State let Rakhine extremists to kill all of us to please Rakhine Buddhists and not to protest against Chinese projects in Rakhine State.

Before China signed for the projects in Rakhine State, Myanmar government persecuted us but it did not intend to eliminate us, its intention was to make us a second-class citizen at that time. ” Abdul Hafiz from Aung Mingalar ghetto of Sittwe said.

Ali Husein from Thak kay Pyin ghetto of Sittwe suggested severe punishment for Burmese genociders. We would like to request the international community to punish all the criminals; Burmese generals, officials, heads of ANP party, Nazi like monks such as Wirathu and Sitagu.

We also appeal all those who like democracy and respect human rights to boycott Made-in-China products worldwide to create pressure on the criminals as well as supporter of genociders, China. Though Chinese could establish one of the first civilization on Earth in ancient time, communist China seems an uncivilized nation in action ignoring human rights and selfish desires to suck human blood .” He continued.

The 15-member Security Council came to Myanmar on April 30 and met the key figures who committed genocidal operations against Rohingya. Though all members in UNSC delegation saw atrocities of Burmese army with their own eyes during their visit to the Rohingya refugee camps in Bangladesh, they did not announce any resolution in order to ensure justice and accountability.

UNSC delegation urged Myanmar government to punish perpetrators of violence, including sexual violence and abuses and violence against children. Is there any criminal who admits his or her crime for the accountability on Earth? How could UNSC delegation expect that from Burmese genociders?

To save their lives from genocidal operations of Burmese army, more than 700,000 Rohingya fled to Bangladesh. Fleeing refugees have reported killings, rapes and arson on a large-scale. Myanmar has said its operations in Rakhine were a legitimate response to attacks on security forces by Rohingya insurgents with swords and wooden sticks.

The prosecutor of the International Criminal Court (ICC) has asked the court to rule on whether it has jurisdiction over the deportations of Rohingyas to Bangladesh, a possible crime against humanity. The main actor of Rohingya genocide, Army Chief Senior General Min Aung Hlaing said refugees returning to Myanmar would be safe as long as they stay in the areas designated for them.

His intention is to continue Rohingya genocide keep them in the ghettos depriving basic human rights including citizenship. The Army Chief met the visiting delegation from the UN Security Council in the capital Naypyidaw on April 30.