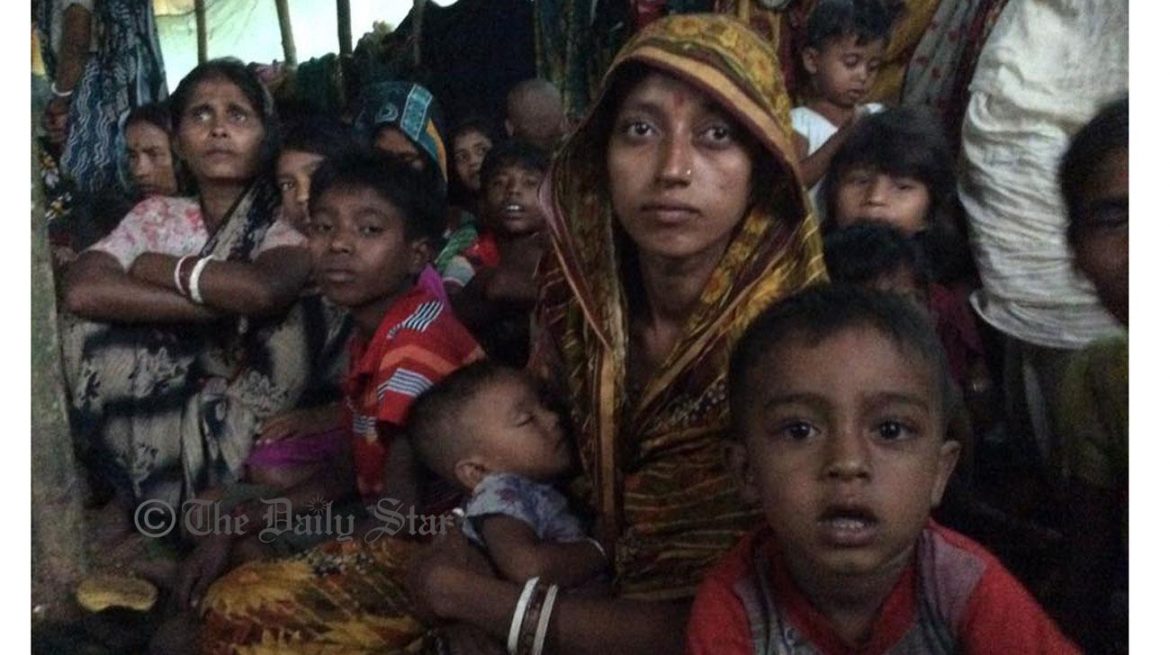 Around 453 people of different ages of Hindu community enter Bangladesh territory along with Rohingyas through Rezu Amtola border and take shelter at a makeshift tent at Paschim Hindupara of Katupalong on August 31, 2017. Photo: Pinaki Roy/Star

On 12th September 2017, some Hindu who lost their homes said “Unknown people covering faces with masks came and attacked them. Myanmar’s famous propagandist Zaw Htay tried to deceived the World that ARSA attacked Hindus using some hired Hindu fake victims. When Human Right Watch groups and other right groups pointed out the reality, Zaw Htay deleted the post without any explanation.

Now, as a second attempt to deceive the World leaders, Army generals, Information Committee, and propagandist Zaw Htay are lying in chorus using another hired group of Hindu that they found dead bodies of Hindu in the north-west of Yebawkya village, Maungtaw township.

“Dead bodies were discovered buried in the earth pit, 1200 meter away in the north-west of Yebawkya village, Maungtaw township at 11:05 am on 24 September.” State media announced. Who showed the place to those Hindus, how do displaced Hindu become smarter than Myanmar intelligence?

State media wrote “According to a villager of Hindu faith, a resident of Yebawkya village, who, nevertheless, was now in neighboring country made a contact by phone to U Ni Mal (a leader in helping Hindu people), a resident of 4 mile Maungtaw, now displaced to Sittway due to ARSA terrorist attacks, informing that about 300 ARSA terrorists had arrested and took away about 100 men and women of Yebawkya village on 25 August and at about 1000 meter in the west of the village the ARSA terrorists killed the villagers except 8 women who were forced-to covert to Islam and brought to Bangladesh.”

Video interview of Hindu women who fled to Bangladesh is available. State media contradicts with the interview of those women; differed the date and Hindu in Bangladesh admitted unknown perpetrators.

State Media : “To confirm the information, the responsible group including U Ni Mal, U Shwe Ni, 3 villagers from Khamaungseik village and 4 villagers from Tamanthar village set out to Yebawkya village at 7 am on 24th September. They were searching around the area in separate groups and found the suspicious ground condition and offensive smell at about 1200 meters sin the north-west of Yebawkya village.”

We would like to ask the State “Do you have intelligent agency or not? Why do you depend on the information of Hindu refugees in Bangladesh only? Why don’t you listen the voice of desperate Rohingya refugees whose homes were burnt down and whose relatives were slaughtered by Myanmar military? Why don’t you investigate after 25th of August, 2017? If it was difficult to investigate, why don’t you allow the international investigation to figure out the real event?

Thousands of Rohingya civilians were slaughtered by Myanmar military and hundreds of Rohingya mass graves were discovered, filmed them and spread throughout social media and international news agencies. State media admitted 371 terrorists died during the fight, where are those corpses?

The Arakan Rohingya Salvation Army (ARSA) insurgent group denied killing the Hindus saying it did not attack civilians. Horrible genocidal operation of Myanmar military against Rohingya in western Myanmar’s Rakhine State began on August 25, 2017, when ARSA militants attacked about 30 police posts and an army camp, killing about 12 people. The United Nations has described as ethnic cleansing a sweeping government offensive in the north of Rakhine State in response to those attacks.

As military operation is the plan of ethnic cleansing, recent mass graves might be Rohingya. Except some hired Hindu of the State, majority Hindus are very close to Rohingya.

There was no conflict or fight between Hindu and Rohingya in the history of Arakan. In Sittwe, many Hindu help Rohingya buying many necessary things for them since 2012. Hindu are not enemies of Rohingya. If ARSA really wanted to attack civilian, they would attack and kill Rakhine who robbed their lands and rights, why would they kill Hindu?