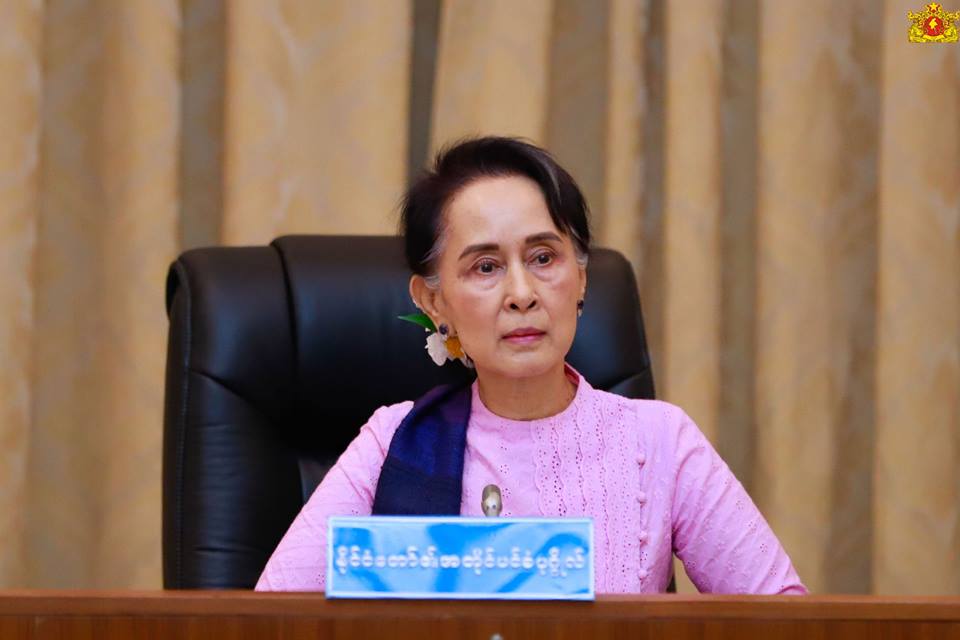 Suu Kyi meets the Central Committee for Implementation of Peace, Stability and Development in Rakhine State at the Presidential Palace in Nay Pyi Taw on May 4, 2018. (Photo @state.counsellor FB)

State Counsellor of Myanmar released a Statement on May 1, 2018. She said in it that the government would work with two UN agencies on the repatriation of refugees in Bangladesh and in rebuilding conflict. We thought it was positive in the beginning but later, we came to know it was delusive to halt action of UNSC delegation.

The government said “it is appropriate time to work with UN agencies” but State media is continuously using the term Bengali for Rohingya and denying the army’s atrocities against Rohingya. Myanmar government lied about resettlement of IDPs in Myebon.

It said that it closed down IDPs and is resettling them into their homes. Out of more than 140,000 IDPs, no single IDP could go his or her own place yet. Government is forcing IDPs to move from old IDP camps to newly built concentration camps. All IDPs demand to resettle them in their own places.

“The government of Myanmar is pleased with working in partnership with the United Nations to deal with many serious challenges that our country faces.” Aung San Suu Kyi said. In reality, she wants to save army generals who committed Rohingya Genocide and issue NVCs for Rohingya to make them illegal Bengali from Bangladesh.

If she really want to work with UN agencies, she should firstly resettle all IDPs in Rakhine State in their own places where they lived before State back violence against them. Secondly, she must stop calling us Bengali and restore our rights including our own name “Rohingya.

She said the government and the UN must work hard on repatriating the refugees while resolving the causes of the recent violence. How can those refugees return when government denies their existence and tries to publish a book, “No Rohingya in Myanmar History“? The term “Bengali” is used for Rohingya as a State’s plan of Genocide. There was no conflict in Rakhine State. All violence were organized to eliminate Rohingya by the State.

“I am confident that this is an important turning point,” she said. The real turning point can be visible when the government announces Rohingya are citizens of Myanmar and removes genocidal policy against minorities; especially Christians and Muslims.

Pointing the recommendations of Rakhine Advisory Commission, she is concealing State’s plan of genocide and human rights. If she really intends to implement the recommendations, she must restore Rohingyas’ rights and provide security for all Rohingya.

No Rohingya needs to hold National Verification Cards, genocidal cards to eliminate Rohingya. We can prove being citizens and Rohingya ethnic in current official records of Myanmar if it allows us to show in front of international fact-finding mission.