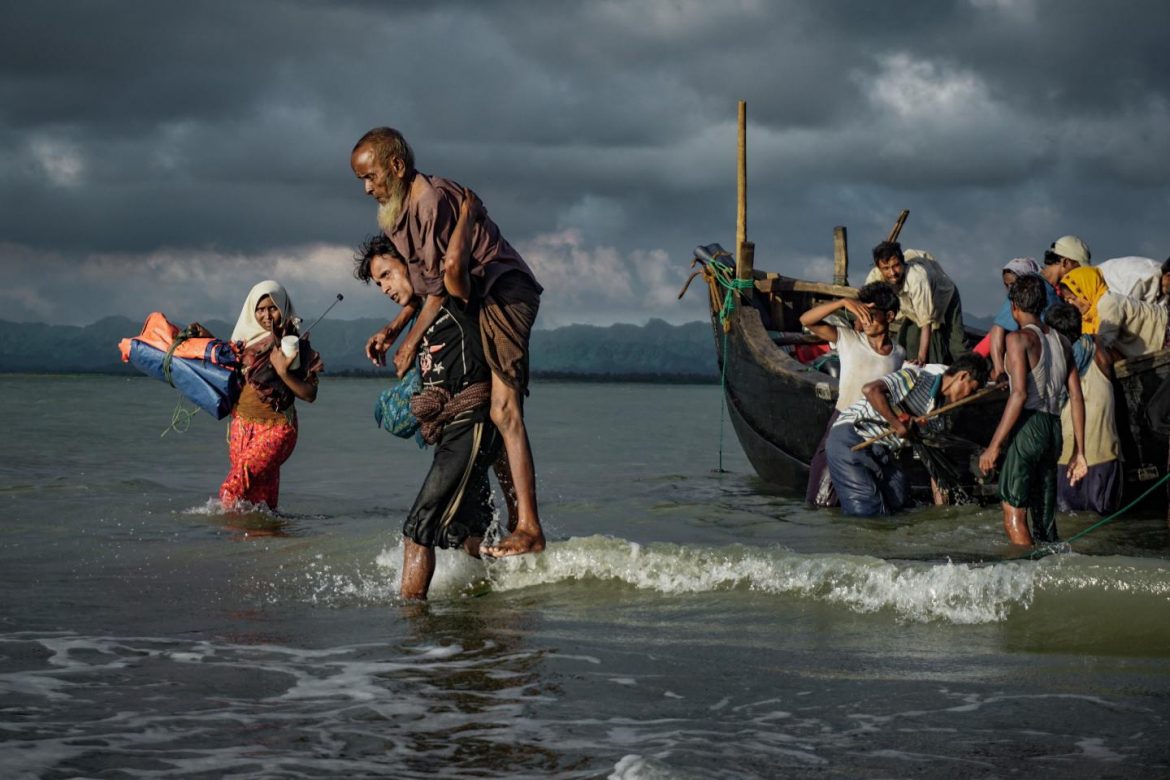 Rohingya Muslim refugees disembark from a boat on the Bangladeshi side of Naf river in Teknaf on September 13, 2017. (MASFIQUR SOHAN/NURPHOTO VIA GETTY IMAGES)

ARSA is being accused as a terrorist group by Myanmar government though it clearly declared that ” We fight for our rights and our target is only Burmese armed forces, not other ethno-religious civilians. Using ARSA as an excuse, using air force, navy and ground forces with heavy machine guns, Myanmar military killed hundreds of innocent civilians, burnt thousands of Rohingya’s home and arrested thousands of civilians in five months.

On 25th of August, 2017, ARSA attacked the police posts. Both times, ARSA used wooden sticks and swords attack security officers of Myanmar. Many video clips were released by ARSA showing their faces and mentioning their targets. Myanmar army has a great experience of ground fighting because they fought with other ethnic groups for many decades.

Why did they fail to arrest a limited number of ARSA, whose faces are well-known through media? Is ARSA a drama of Myanmar genociders to kill all Rohingya in a easiest way? International Community should not give Myanmar a chance to make drama to conceal genocide, World leaders should take immediate action to end the Rohingya Genocide.

When Myanmar genociders heard about United Nations Secretary-General Antonio Guterres he would publicly brief the Security Council on violence in Myanmar, which he has described as ethnic cleansing, after seven countries on the 15-member body requested the meeting, they created a new drama; ARSA’s mass killing of Hindu.

Reliable journalists have not been able to freely access northern Rakhine to verify the claim and State media spreads a nation-wide propaganda that ARSA are Bengali terrorists who mercilessly massacre Hindu ethnic in Maungdaw. Instead of creating drama, Myanmar government must invite experts for counter terrorism if ARSA is really a terrorist group.

Terrorists and terrorism are enemy of the whole humanity. No terrorist can represent an ethnic or a religion.

Many Hindus from Maungdaw refuged in Bangladesh amid a Myanmar army crackdown on insurgents who attacked police posts on 25 August 2017. Like Rohingya, Hindus in Rakhine also have been under persecution because their feature, culture and dialect are very similar to Rohingya’s and they don’t believe Buddhism as Mrama and Thet do.

In 2012, Myanmar security forces used Mrama whose dialect and feature are similar to Rohingya, wore Islamic dress and burnt houses. According to recent Hindu victims, the masked men attacked their village with sharp weapons and hacked many to death and burnt their houses. There must be an effective international investigation under the supervision of the United Nations to Rohingya cleansing and Hindu issue.

Myanmar is forcing to appear hundreds of Atta Ullah

Commander of ARSA, Atta Ullah or Abu Ammar Jununi is a fruit of decades long persecution. Desperate youth always looses spirituality whenever they face persecution. Some people take advantage of such persecuted and desperate youths , giving them a couple of dollars, or turning them into robots. Those young people were abused to an extent that they could be manipulated.

They have been used as murderers on the pretext of some crazy ideals or goals and they have been made to kill people. Some evil-minded people have wanted to achieve certain goals by abusing those young people who were deprived education and make no right decisions. This kind of people have been easily turned into robots and accept terrorism. Sometimes, anger makes such people to take revenge to the perpetrators in any price.

Atta Ullah’s parents left the country because Burmese persecution. He became such a person who came to Arakan to take revenge.

ARSA has strongly denied any links to Al-Qaeda, Islamic State or any push to establish an Islamic caliphate or launch a religious-driven insurgency, while some experts have speculated that foreign fighters could be attracted to the area to fight.

If international community fails to end Rohingya genocide, there might be hundreds of Atta Ullah very soon. That is the reason U.S. President Donald Trump urged the U.N. Security Council to take “strong and swift action” to end the violence.

Teaching culture and morality have been being replaced with unacademic rituals after the installation Buddhist worship room in every school and all educational institutions of Myanmar since 1988.

The only answer for these questions is lack of healthy education. Rohingya have been being deprived of educational rights since 1970s. Majority Buddhists have been poisoned through hate speeches of State backed 969 and MaBaTha monks led by Sitagu and Wirathu. Though Myanmar boasts democracy transition period, State still has no program to educate public about democracy and human rights, rather, it spreads hatred and violence against Muslims and Rohingya.

World Leaders failed to resettle IDPs on their own places

After State backed violence against Rohingya in 2012, former President Thein Sein demanded UN envoy, current UN Secretary General, Antonio Guterres to bring and settle all Rohingya to a third country. As UN refused his demand, he planned to kill all Rohingya keeping in the ghettos without food and basic rights.

UN Organizations, WFP and other INGOs provide humanitarian aid to save Rohingya but thirty to forty percent of the aid went to the pockets of Burmese Generals. Myanmar genociders successfully kept all Rohingya in the ghettos and continues genocidal operations against Rohingya. Recent atrocities against Rohingya are the same plan of Thein Sein using different excuse.

Myanmar genociders have no plan to resettle old IDPs of 2012 and recent refugees repatriation unless International Community takes effective action against genociders.

Buddhist-majority Myanmar has not only rejected U.N. accusations of ethnic cleansing against Rohingya, it has also refused the existence of Rohingya. It repeatedly alleges that Rohingya are illegal immigrants from Bangladesh.

Though International Community witnesses atrocities, mass killing, burning and destruction of the whole Rohingya community, Suu Kyi has denounced rights violations in an address last week and vowed that abusers would be prosecuted. She also said any refugees verified as coming from Myanmar under a 1992 process agreed with Bangladesh would be allowed back.

The first option is take action against all genociders and restore rights of Rohingya and the second option is arming Rohingya refugees to fight for their rights. said a Rohingya community leader from Badupa IDP camp of Sittwe.

Many leaders on Earth are using Rohingya issue as tool to gain their political advantages even though they also persecute minorities and oppositions in their own countries. United Nations and International Criminal Court should take immediate action against Myanmar genociders as an initiative step to end human rights violations internationally.