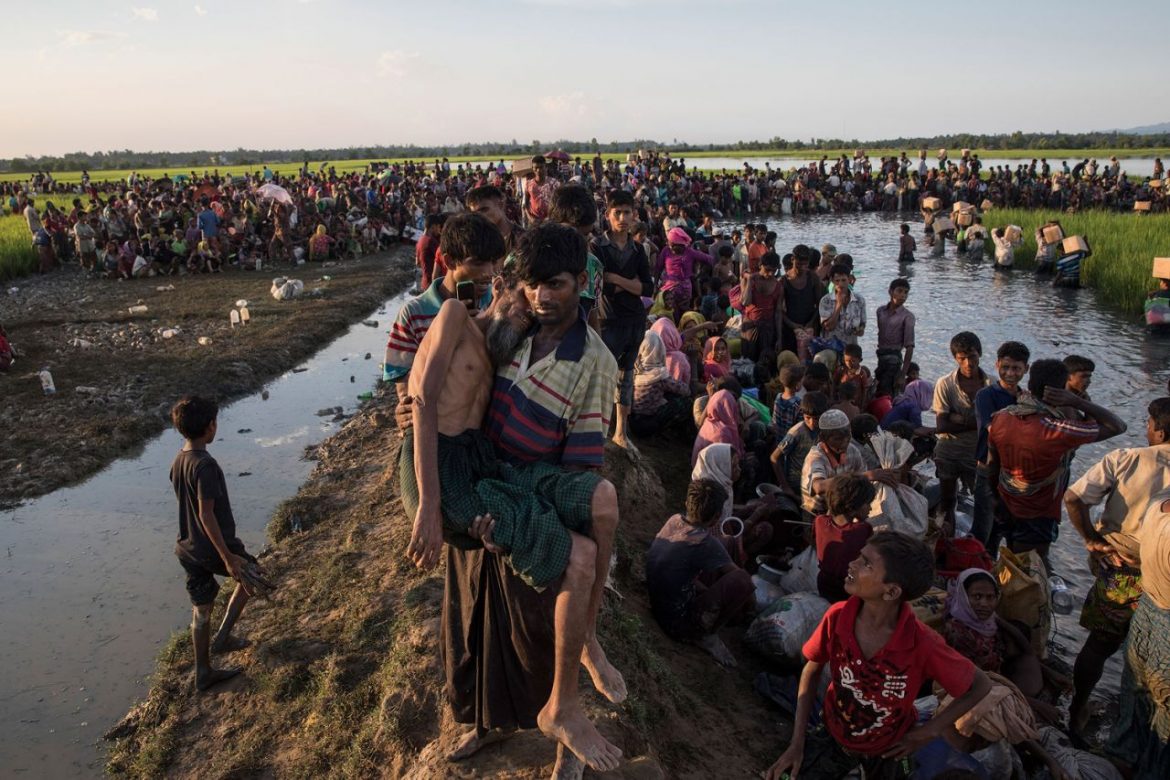 An elderly man who collapsed is carried to a medical facility as thousands of Rohingya refugees fleeing from Myanmar sit along a muddy rice field after crossing the border near Palang Khali, Cox’s Bazar, Bangladesh, on October 16, 2017. (Photo: Paula Bronstein/Getty Images)

Every person who knows human value and respects human rights should boycott buying Chinese products manufactured using fuel such as Gas and Oil to end Rohingya Genocide. To build Gas Pipeline from KyaukPyu of Rakhine State of Myanmar to China, Chinese government helped Burmese generals for genocidal operations and violence against Rohingya in 2012 and 2013 that caused more than 140,000 internally displaced Rohingya.

More than 600,000 Rohingya from Northern Rakhine State have been displaced since 25 August 2017 through genocidal clearance operations; the most cruelest atrocities against Rohingya- mass killing, gang rape and arson attacks on ninety percent of Rohingyas’ homes by Myanmar security forces to build Chinese Industrial Zones on Rohingyas’ lands.

The United Nations high Commissioner for human rights, Zeid Ra’ad Al Hussein described the atrocities as a “textbook example of ethnic cleansing. The Chinese government has decided to stand by the Burmese military, though Burmese Security Forces have been committing Genocide against Rohingya.

International Community should find a way for the withdrawal of China’s Veto Power in the UN Security Council. Veto Power must not be used for the destruction of humanity.

U.N investigators interviewed Rohingyas living in Refugee Camps in Bangladesh and gathered testimony pointing to a “consistent, methodical pattern” of killings, torture, rape and arson. The Convention on the Prevention and Punishment of the Crime of Genocide defines it- “acts committed with intent to destroy, in whole or in part, a nation, ethnical, racial or religious group”-and codifies a commitment to “liberate mankind from such an odious scourge.

Nearly 150 countries have signed the Convention, accepting an obligation to prevent genocide from happening and punish those who commit it. But China helps Burmese Genociders to continue the destruction of Rohingya. After the destruction of Rohingya in Northern Rakhine State, Myanmar government has started another genocidal operation in Sittwe, Pauktaw, Minbya, Kyauktaw, Mrauk U and Punna Kyun: no fishing and no livelihood for the Rohingya who do not accept genocidal verification cards-a card to make Rohingya as illegal immigrants from Bangladesh- “Rohingya Extermination Plan” starve them to death.

In Sittwe, Rohingyas who depend on fishing for their livelihood are now starving because authority does not allow them for fishing without genocidal NV cards. If you look at every Chinese product using your spiritual eyes, you could see Rohingya’s blood stained in it. To stop the destruction of Rohingya by the Myanmar State’s policy of Genocide with help of China, everyone should boycott Chinese products.

Accounts of rape, burning children and murder How a Rohingya massacre unfolded at Tula Toli

Ongoing atrocity against unarmed peaceful protesters in #Myanmar by terrorist #MinAungHlaing's security force is wo… https://t.co/ZvcwBQONqw

Reply Retweet Favorite
Why does #US have no intention to take action against terrorist #MinAungHlaing? Some answers there is no oil. Actu… https://t.co/vf90wOsKNY

Reply Retweet Favorite
Dozens of fighter jets are flying in #Mandalay according to #RFA Burmese. Police and security forces of terrorist… https://t.co/wCJYWwsm1E