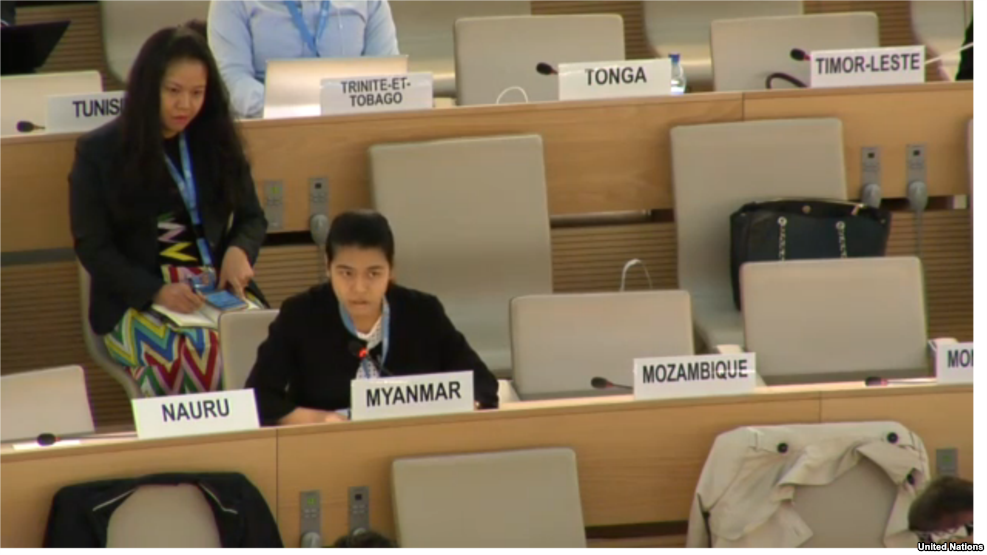 The so-called first democratically elected government in decades has launched a 100-day action plan on all fronts using the same policy towards Rohingya; continues genocide by denying Rohingya’s existence and forcing them to accept a genocidal NVC cards, variation cards purpose of which is that Rohingya who had right to vote and to be elected until 2015, are considered illegal immigrants needed to verify now by NLD government. Daw Aung San Suu Kyi has repeatedly been accused of having little interest in the plight of Rohingya.

Representative of Myanmar, Daw Thet Thinzar Tun boasted in UN assembly that there was no Buddhist fundamentalist in Myanmar that confirmed State’s sponsored Neo-Nazi Buddhists for hate speech and Rohingya Genocide.

The condition of Rohingya in Arakan continues to be a serious humanitarian and human rights concern; all Rohingya are kept under genocidal ghettos: no right to work, to attend school, get medical access, no freedom of religion, government has no plan to resettle IDPs in their own places.

Buddhists’ Compassion or persecution against Rohingya?

A Rakhine police tried to confiscate mobile of a Rohingya in Manzi IDP Camp, Sittwe on 30.12.2013 by beating him. Meanwhile, a good police who usually helps Rohingya, came to help the Rohingya. While two police arguing about the case, two IDP came and attacked the first police. Second police who was a Shan ethnic took him to hospital. The next day, on 31.12.2013, Rakhine authority announced that 2nd police had died in the hospital. We had doubt that Rakhine authority had killed him intentionally to create violence and to remove a good police who helped Rohingya.

Amir Hussein who was freed recently from prison

On 31.12.2013 two Rohingya boys were arrested: Muhammed Karim, son of Elyas, 12 years old and Amir Hussein, son of Abdu Shukkur, 13 years old, both are cousin brothers, collected waste materials along the road sides and sell for their survival. They were kept in No.1 Police Station, Sittwe for more than 6 weeks without any charge, no family member were allowed to see them. Later they were brought to Yangon and their families thought they were tortured to death in police custody.

Mother of Karim has been desperately crying for her son and lost her consciousness now. Please help to free innocent Karim and save his mother.