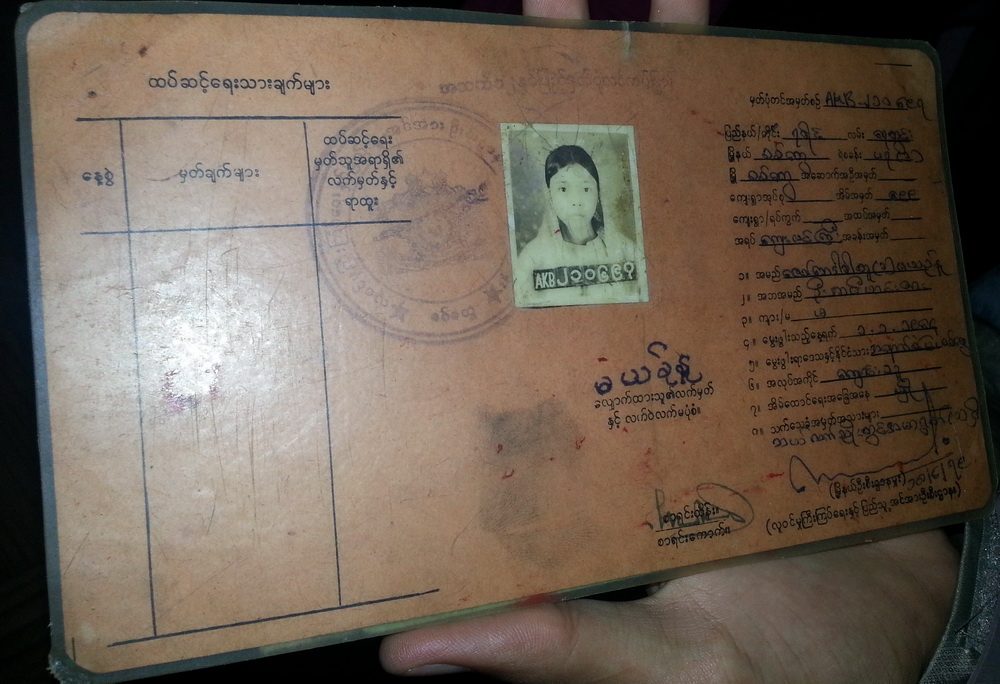 (Sittwe, Myanmar) – Myanmar, formerly Burma has been threatened by disintegration since 1948 when it gained independence from British. Myanmar has diverse ethnics with different historical backgrounds and discrimination has been practiced widely within the Union of Burma. This has caused several rebellions against the regime.

The discrimination is mostly based on religion; especially Christianity and Islam, they have became victims since independence. During the parliament democracy of U Nu, he tried to make Burma into a Buddhist country.

Thousands of violent attacks have been initiated towards Christians and Muslims since independence that caused violence, hatred, poverty, and intolerance. Burma, once South East Asian’s tiger became one of the poorest countries in the World. 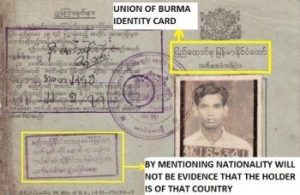 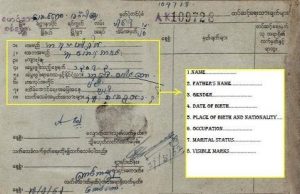 Union Identity Cards or National Identity Cards were published for the first time in 1952 and distribution was started only certain areas, not nationwide; there was no Identity card with the discrimination key word until 1961.

” When the military regime took power through coup d’tat, discrimination started being used in identity or registration documents.”

As shown above, the regime started discrimination by using a note of written form or seal form in the identity card; by mentioning nationality will not be evidence that the holder is of that country. I understand that note is the persecution key or discrimination key; it doesn’t matter someone holds such identity card; if the regime wants they can easily make him or her as a foreigner. Back of the Union Identity Card can be called standard as it didn’t mention the person’s race and religion. Up to 1982, there were only two types of people; citizen and foreigner but a new citizenship law was passed in 1982 which classified people in different groups.

(a)  “State” means the Socialist Republic of the Union of Burma;

(b)  “Citizen” means a Burma citizen;

(d)  “Naturalized Citizen” means a prescribed by this Law;

(e)  “Foreigner” means a person who is not a citizen or an associate citizen or a naturalized citizen;

(i)   “Central Body established under this Law. Citizenship Nationals such as the Kachin, Kayah, Karen, Chin, Burman, Mon, Rakhine or Shan and ethnic groups as have settled in any of the territories included within the State as their permanent home from a period anterior to 1185 B.E., 1823 A.D. are Burma citizens. The Council of State may decide whether any ethnic group is national or not.

After approval of 1982 citizenship Law, the Myanmar regime published and distributed Pink Color Cards nationwide but majority of Christian and Muslims did not get that card even they held the former national identity card. My grandparents, my parents, me and all of my siblings hold Union Identity Card but no one gets pink color identity.

Let’s have a look what is that pink color identity. Pink Color Identity of Myanmar, Front Page 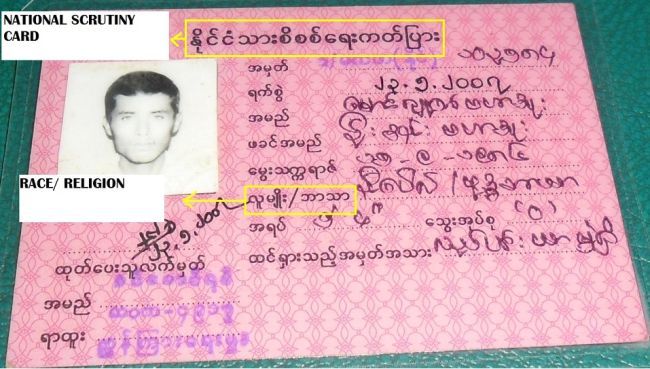 In this front page, the title of the card is not national identity card, it is national scrutiny card; a person who holds it is under examination stage to get nationality. It means that nobody knows when he or she will become a nationality of Myanmar but the regime deceives the people as if it is real citizen card. As in the former Union Identity Card, the pink color identity card also has some discrimination key words; firstly it doesn’t mention national identity cards, secondly it mentions a person’s race and religion, thirdly a person must change it time to time. 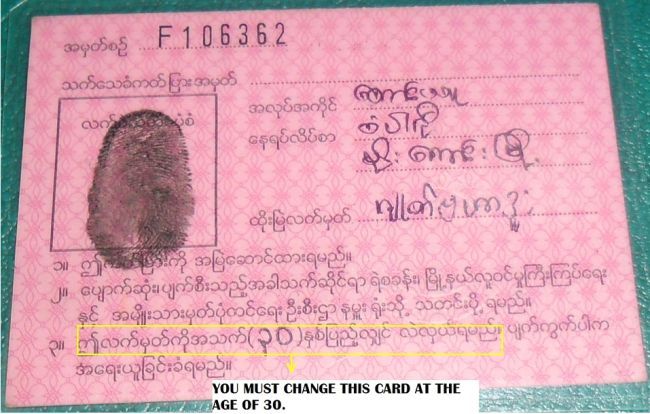 It is impossible to build a democratic country by implementing such illogical citizenship law of 1982 and uncertain identity cards; there should be only two types of people, citizen and foreigner. The main cause of violence, poverty, discrimination, hatred, intolerance, and protest is the Citizenship Law of Myanmar. It is barrier for democracy process, it can cause different country within the country, and it can cause regional and international conflicts.

In the name of certain ethnic rights, the regime has been started persecution and ethnic cleansing. Discovering the current monks’ nationwide protest, every person can understand the regime’s attitude. The monks who lead the protest are mostly Rakhine.

The Rakhine Buddhists and regime has already started countrywide violence in the name of Rohingya, they claimed that there is no religious conflict but everywhere Christian and Muslims are in danger. International Community should condemn strongly against such discriminations. The regime is still deceiving the world.

According to Reuters, just hours after the monks dispersed, President Thein Sein’s office announced it would not permit OIC representation in Myanmar. It was not immediately clear if the announcement was linked to the protests or had been planned in advance.

(NOTE – I wrote this article for www.salem-news.com on 17th October 2012 and transferred it to my own website now as a record.)