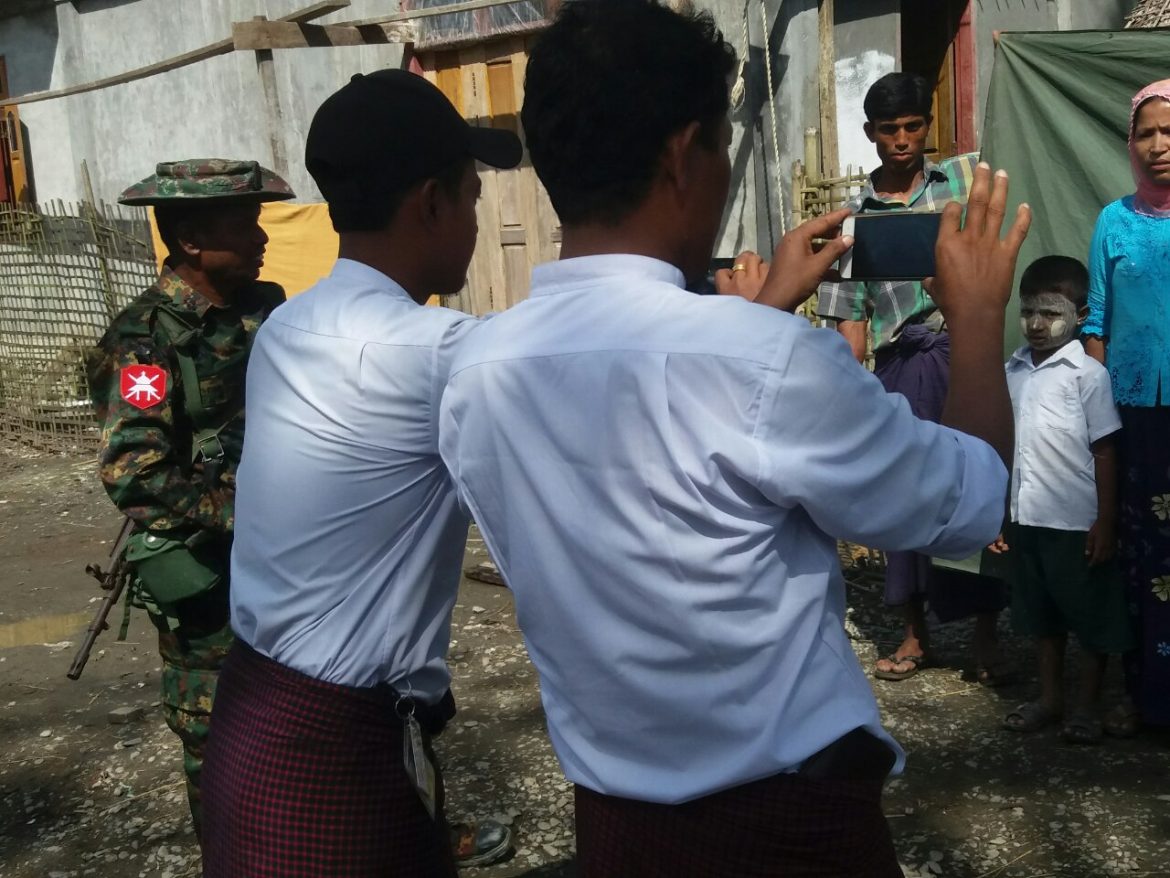 Myanmar military and Immigration officers taking pictures of Rohingya before issuing their family list renaming their ethnic into a religious identity "Muslim".

A new 15-members committee led by vice-president U Myint Swe was formed by Suu Kyi government to implement the recommendations of the Kofi Annan-led Advisory Commission on Rakhine State. On 5th October 2017, the committee has started its work in Minbya, Kyauktaw, Mrauk U and Pauktaw by issuing a new family list for Rohingya in which the name of ethnicity is mentioned “Muslim.”

Since the formation of Kofi Annan-led Advisory Commission, no Rohingya opposed the commission and its work though there is no Rohingya member in the Commission because they want to escape from the genocidal ghettos. Rohingya have been under genocidal blockage deprive of all fundamental rights including livelihood, education, social activity, healthcare, and freedom of movement since 1990.

The President Office of Suu Kyi government announced the new committee is responsible for accelerating the national verification process and ensuring “equal access to education and access the health service regardless of religion, race, citizenship or gender.” 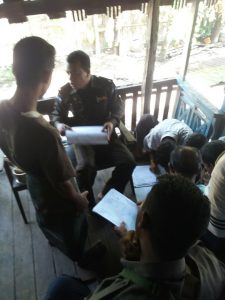 Implementation Committee and Burmese Immigration issuing family list with “Muslim ethnic” for Rohingya in Mrauk U on 9 October 2017.

The implementation committee announced that “we will work towards improving rule of law, stability, harmony between the different communities, security, the economy, social affairs, basic infrastructure including the maintenance of ethnic villages distributing humanitarian aid, and closing camps for internally displaced persons.

The United Nations wants to see full implementation of the recommendations made by the Advisory Commission on Rakhine State to ensure safe repatriation of the displaced Rohingya to their homeland in the Western coastal state of Myanmar. But, in practical field, the new implementation committee works to complete “ethnic cleansing program of former regime by issuing the new family list with “Muslim” as an ethnic name.

But none of the Burmese politician including Aung San Suu Kyi does not want to restore rights of Rohingya and implement the Annan’s recommendations sincerely. Before releasing the Annan Commission Recommendations, Sen. Gen. Min Aung Hlaing sent head of Ma Ba Tha Buddhist extremists, Wirathu to Maungdaw, he himself met head of Rakhine extremists, Aye Maung and discussed to avoid the implementation of recommendations, planned to use ARSA to show the World that Rohingya are terrorists said an experienced politician from Sittwe.

Burmese regime has been trying to transform all Rohingya into illegal immigrants from Bangladesh. Though Thein Sein government conducted many violence against Rohingya, majority Rohingya have documents in their hands related to Myanmar national. So, Myanmar military, Border Guard Police and Rakhine extremists cooperated to destroy all official documents in the hands of Rohingya; committed violence in the name of “9 October 2016, Border Guards Post attacks”, and “25 August 2017, police posts attacks” using ARSA, deliberately burnt down ninety percent of Rohingya’s homes in Rathedaung, Buthidung and Maungdaw.

All departments including Immigration have started operation in #MraukU to transform #Rohingya to stateless on 9.10.17. #Citizenship #Burma pic.twitter.com/vOMzoPVvk9

Military’s atrocities against Rohingya; mass killing, rape and blazing houses cause Rohingya exodus to Bangladesh. Nearly one million Rohingya fled to Bangladesh. Suu Kyi government said “we will call back only those refugees who can show documents regarding Myanmar national. Genocidal propaganda against Rohingya has been started since 1970, alleging Rohingya “illegal Bengali immigrant” and claiming there is “no Rohingya in Burmese history”.

When regime’s long term plan to eradicate the term “Rohingya” seems to be unsuccessful, Ye Htut, former information minister said “Rohingya as an ethnic name is possible, but they cannot be an indigenous ethnic of Myanmar.” Now, the implementation committee, after driving majority Rohingya out of the country, is issuing a new family list for the remaining Rohingya describing the term “Muslim” in the place of ethnicity column.

According to current law of Myanmar, “Muslim” is not a name of ethnicity.

Rohingya have no other option except obeying the instruction of authority accept the family list with “Muslim” instead of ethnic name. Using “Muslim” for an ethnic name is against the law of Myanmar. So, whoever accepts “Muslim” as his or her ethnicity, might be sued by any organization in any time. 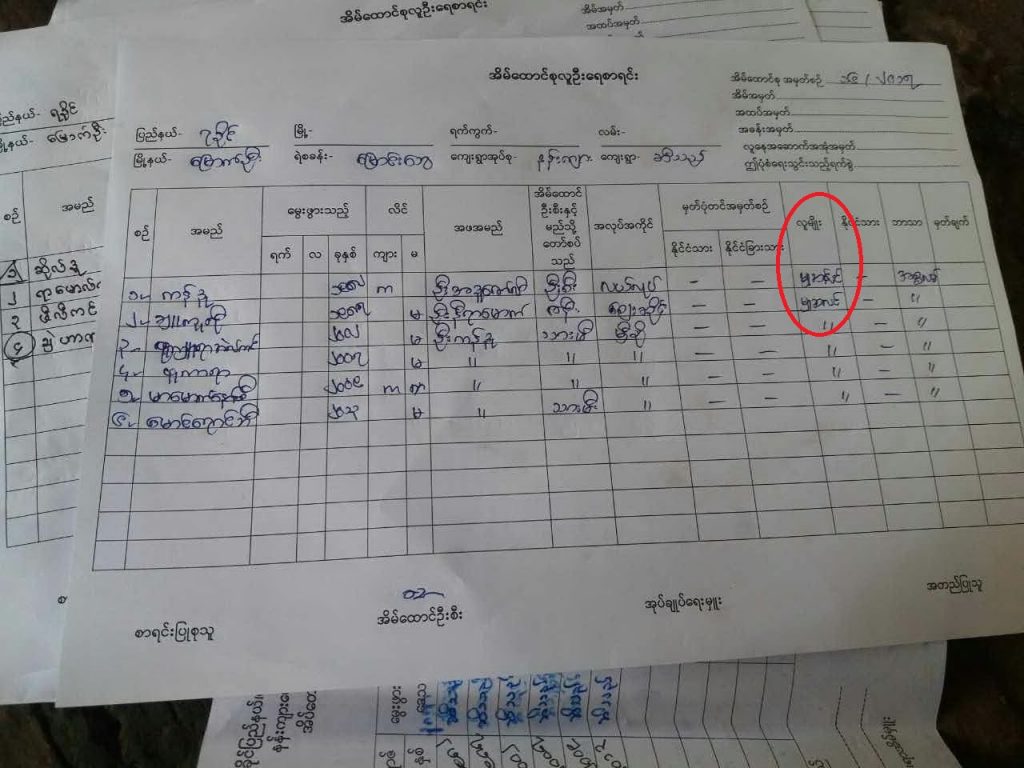 Recent issued family list for Rohingya in which the circled ethnic column is mentioned “Muslim” instead of ethnic name. According to current law of Myanmar, “Muslim” is not an ethnic name.

Myanmar regime has used State Media for 50 years to spread propaganda against Rohingya saying “there is no Rohingya” even though thousands of official documents are available on Rohingya.

State media, TV Channels, Newspapers and journals use the term “Bengali” or “illegal Bengali” for Rohingya. When implementation Committee gave a new name “Muslim”, some of the Rohingya believe that it is better than Bengali or illegal Bengali. Ser Gen-Min Aung Hlaing organized 29 political parties that signed a statement rejecting all recommendations of the Kofi Annan-led Commission.

The tragedy of the Rohingya is magnified and amplified by a human catastrophe and a health catastrophe in both internal concentration camps and camps in Bangladesh. Announcing implementation of recommendations by Annan Commission, implementation Committee is working to meet the plan of former regime, Thein Sein government.

Both Thein Sein regime and Suu Kyi government want to issue NVC for Rohingya though issuing NVC for those whose parents held NRC is against 1982 citizenship law of Myanmar. Suu Kyi claims everything is being conducted according to law but in practice, everything is against not only Myanmar laws but also against international laws; issuing NVC instead of Scrutiny Cards, changing the name of ethnicity into a religious bases name “Muslim”, planning to keep Rohingya in the concentration camps instead of resettling their own places, not enforcing rule of law to protect Rohingya community and not allowing international media to investigate “Rohingya Genocide” happening in Rakhine State.

In short, every conduct of Suu Kyi government regarding Rohingya issue is against the laws. No one in Myanmar has a citizenship ID yet. Even Aung San Suu Kyi, holding a Scrutiny Card, cannot be considered a perfect Burmese citizen, everyone is under examination process for citizens legally.

There is a National Security Law, not in written form but implement by the government body secretly, in which Muslims and Rohingya are considered alien, in their ID cards, at least two-three different names of ethnics must be written to make them illegal immigrants unlike Buddhists.

No human on Earth can represent two-three ethnics at a time. Describing visible ethnicity and religion in the ID card is a deliberate discrimination based on race and religion. Wirathu, head of Buddhist extremists was sent again to Sittwe on 11 October 2017 to visit Maungdaw and celebrate victory of Rohingya Genocide by Sen. Gen. Min Aung Hlaing. Wirathu will visit Maungdaw tomorrow. 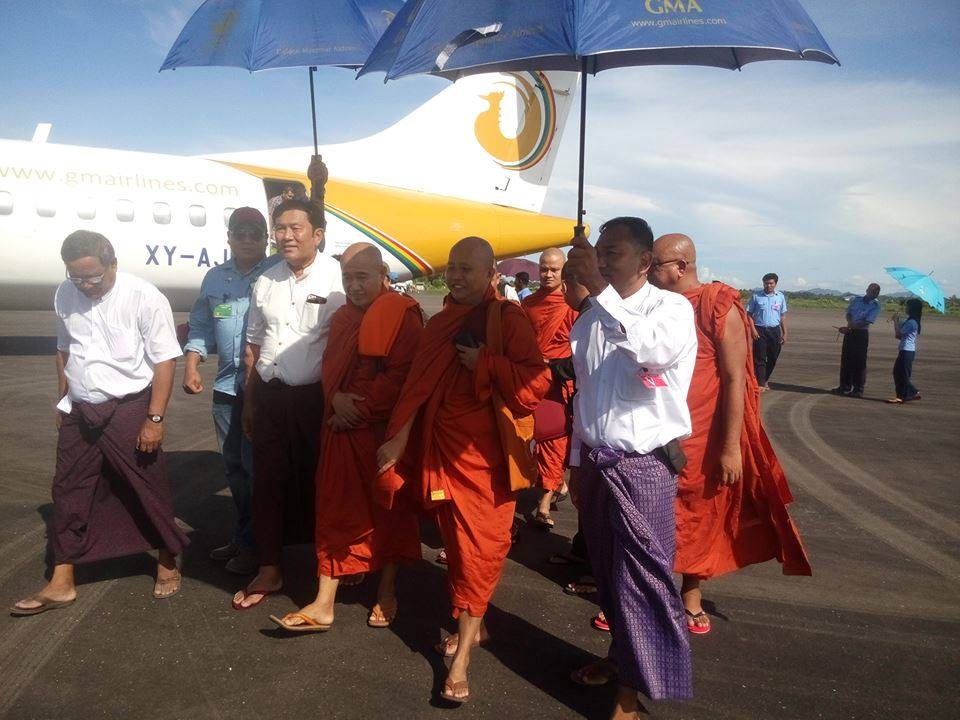