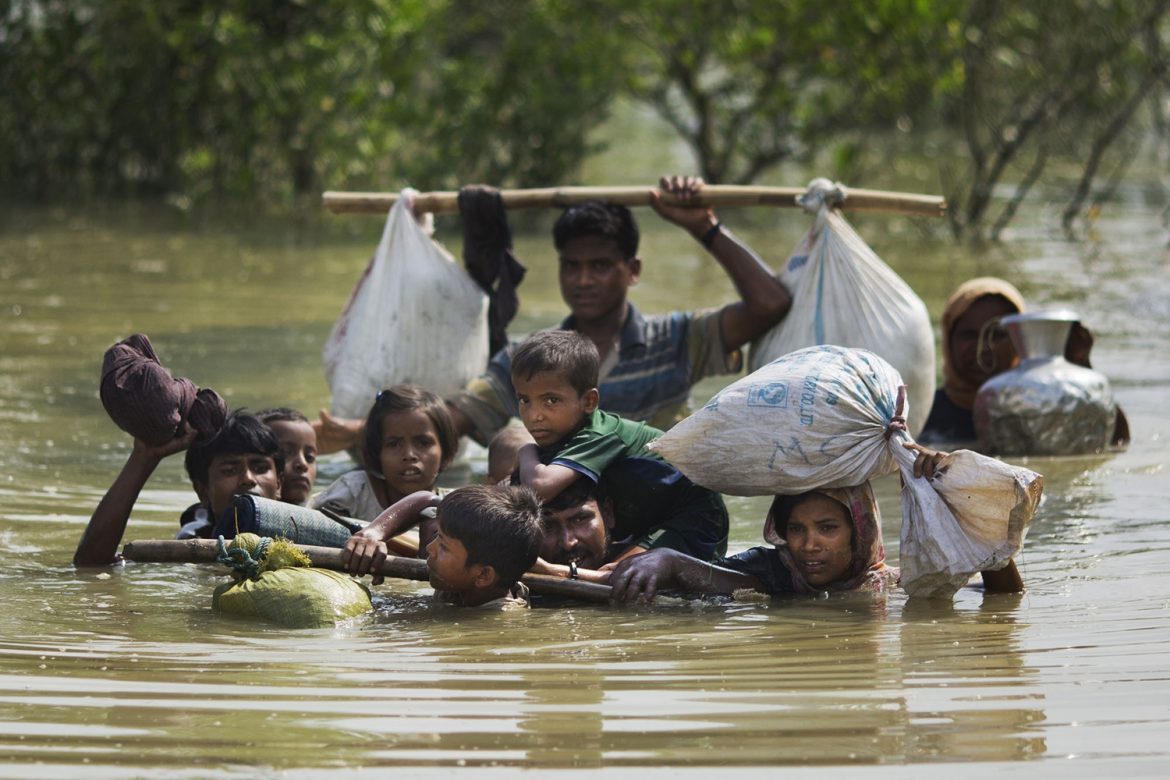 A Rohingya family reaches the Bangladesh border after crossing a creek of the Naf river on the border with Myanmmar, in Cox's Bazar's Teknaf area, Tuesday, Sept. 5, 2017. (AP Photo/Bernat Armangue)

Terror State of Myanmar has been terrorizing Rohingya to make them stateless on Earth since 1970. Until 1990, Rohingya held National Registration Cards like all other ethnics in Myanmar. Military Junta confiscated national identity from Rohingya and replaced them with White Cards using NaSaKa terror groups.

Since 2012, Myanmar generals have been using Buddhist terror groups such as MaBaTha, 969, Rakhita groups, WuntharNu groups to terrorize Muslims and Rohingyas. They staged a genocidal violence against Rohingya on May 28, 2012 to 2014 that caused nearly three hundred thousand Rohingya internally displaced from their homes and out of those displaced persons, nearly two hundred thousand are still in the IDP camps.

After the violence, Myanmar regime keeps all Rohingyas in the ghettos without having fundamental human rights.

Myanmar genociders want to kill all Rohingya: first step of genocide is confistication of national identities and replace them with white card, second step is clearing all evidence related to nationality in the hands of Rohingya and third step is accusing them terrorists for mass killing.

First step was taken place by NaSaKa program from 1990 to 2012. Second step was practically conducted by the genociders from 2011 to 2015. Since 2016, they have been committing mass killing as a pre planned program of third step to complete Rohingya Genocide.

But all media of the Terror State of Myanmar are still accusing Bengali terrorists for the crimes of Myanmar security forces in Burmese version. Illogical and unreasonable allegation of terrorist attacks

2. Suppose reports of State Information Committee are based on reliable sources, every secondary student can easily understand that those who killed 400 people must be considered as real terrorists.

3. According to reliable sources, more than 20000 Rohingya were either slaughtered by security forces of Myanmar or missing since 25 August 2017. Short videos of mass killing are available as authentic evidence of atrocities against Rohingya. More than 150000 displaced from their homes after slaughtering and burning them.

4. If ARSA or Bengali terrorists really exist in Arakan and they are terrorizing Rohingya, Myanmar must allow UN Facts Finding Commission to save Rohingya in Arakan as Myanmar authority failed to stop killing and burning of Rohingya. Why don’t they agree for that?

5. Since 2012, Myanmar genociders who have committing crimes against humanity, have used propaganda to conceal their crimes; allegation to Bengali terrorists for the destruction of Rohingya, Bengali burnt their own houses and ran away, there is no Rohingya in Myanmar, illegal Bengali influx in daily base into Arakan from Bangladesh and claim themselves Rohingya.

In short, NLD led by Aung San Suu Kyi became ruling party in Myanmar, by terrorizing Rohingya and committing destruction of them intentionally, it turns into a “Terror State”. The real terrorists are those who have been killing, burning and destroying Rohingyas’ annihilation on purpose. Therefore, international community should stop those terrorists and save Rohingyas from annihilation immediately.