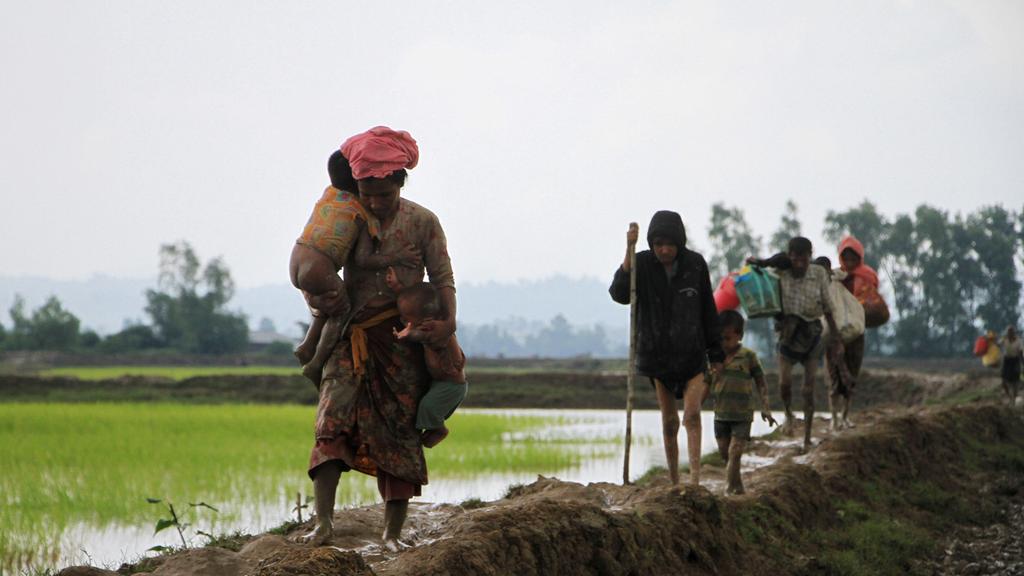 Rohingya Muslim refugees from Rakhine state in Myanmar walk along a path near Teknaf in Bangladesh on September 3, 2017. (Photo by AFP)

A Mro ethnic, Lalin who saved a Rohingya from MaungNuYwa of Buthidaung reported that he heard an order of military commander of 552-battalion, with his own ears; “Kill all Kalars including babies.” Kalar is a derogatory term use for Muslims.

Lalin which is a nickname of a Mro ethnic was brought to MaungNuYwa as a porter to carry things for military on 29 August 2017. He saw soldiers slaughtering Rohingya villagers and commander was ordering them “kill all kalars including babies.”

Lalin saved a Rohingya who lost the whole family.

“Soldiers who were slaughtering villagers might use drugs commit inhumane acts. As soon as they approach the village, start shooting, whoever comes in front of them, are killed brutally, using their knives. I have never seen such a horrible event before, even in the movies.” said Lalin.

“Rohingya have been under persecution since 1970s. In 2012 violence, Rakhine extremists and security forces killed nearly ten thousand Rohingya, and nearly 200,000 internally displaced. Though US President visited two times to Myanmar, Rohingya IDPs could not be resettled on their own places.

Life of Rohingya in Arakan is worse than German ghettos, since 1990. In the name of communal conflict, Myanmar army destroyed all Rohingya in Southern and Central part of Arakan in 2012-2013. Now, in the name ARSA, military has already destroyed eighty percent of Rohingya villages in Rathedaung, Buthidaung and Maungdaw.

More than 20,000 Rohingya have been killed or missing from 25th August to 2nd September.” expressed Bashir Ahmed from PaungDawPyin of Buthidaung.

UN organizations have the population record of all villages in Maungdaw, Buthidaung and Rathedaung. International Investigation can easily figure out actual number of death killed by Myanmar security forces.

During regime era, though Myanmar army wanted to wipe out all Rohingya from Arakan, they could not do that because of international pressure. Actual genocide has been being taken place in the name of democracy; genocidal operations against Rohingyas reach the most violent stages under Aung San Suu Kyi administration.

In this video, The man said “We are from Rathedaung our homes were burnt down by Rakhine extremists in 2012. We have been in IDP camps since 2012, now security forces torched our camps. We have no shelter, no food & medicine. We appeal the World to save us. We are starving now.”