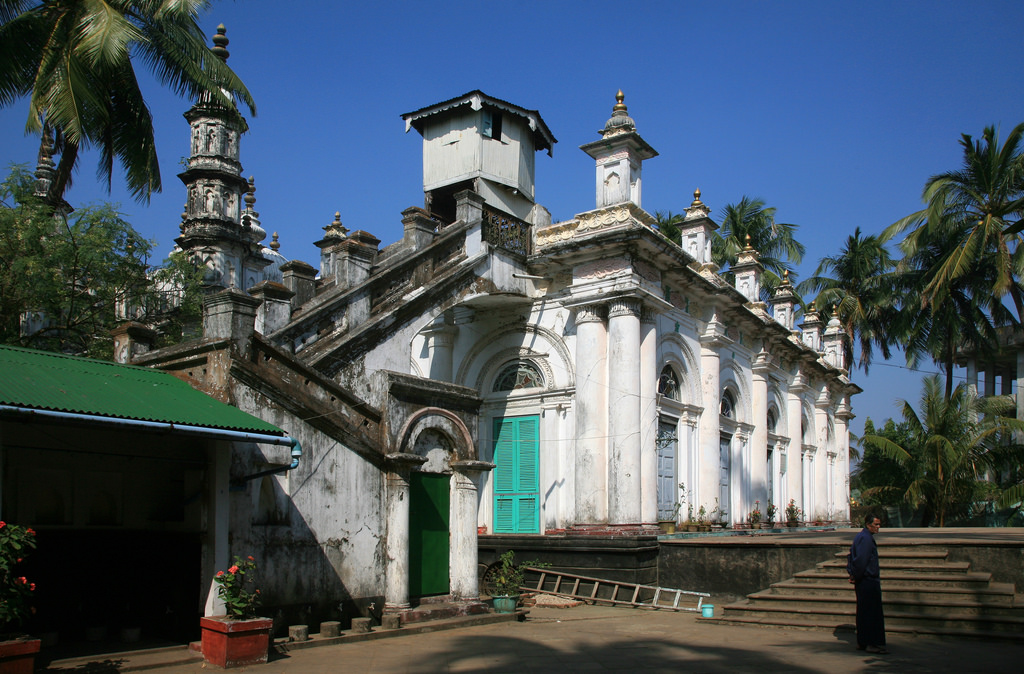 (Sittwe, Myanmar) – Today, 7th Oct 2012, 300 Rakhine Buddhists attacked ancient central Mosque of Sittwe, Akyab, the biggest historical Mosque in Arakan State. First the Rakhine burned the Imam and Muazin houses which were located in the compound of Mosque, and later they burnt all those Rohingya houses near the Mosque.

The burning started at 1:35 PM in the afternoon, by 3:00 PM, polices and military came and called fire trucks to put out the fire. No one died but all properties belonging to Rohingya Muslims were looted or burned. At 4:00 PM, about one thousand Rakhines gathered and tried to destroy the Mosque but the military intervened and halted the destruction. 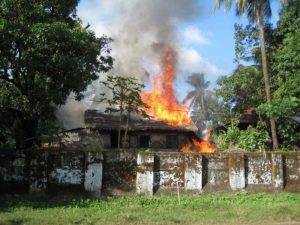 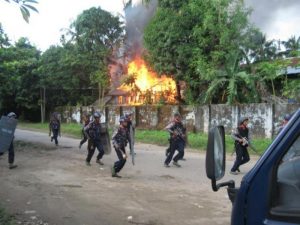 The Myanmar government and Rakhine State authority have responsibilities to prevent and punish those violent acts, irrespective of which ethnic or religious group is responsible, without discrimination and in accordance with the rule of law. Instead, they blamed the Rohingya for having burnt their own houses to destroy a peaceful situation.

In front of police, Rakhine can burn Rohingyas’ houses. Two days ago, three Kaman ladies were severely beaten in front of police forces. Kaman are recognized officially as one of the indigenous races of Myanmar who believe in Islam. Where is law and order, who is responsible for law and order? During Daw Aung San Suu Kyi’s first trip to Europe, she used law and order as her default answer for all questions regarding Rohingya. On her second trip, she used “violence in both sides” as her default answer.

“She meant both Rakhine and Rohingya are responsible for the conflict. One side, Rakhine have polices, militias, and all authoritative staffs. Rakhines have full rights, they can do freely whatever they want. On the other hand, Rohingya have nothing at all and they are under detention, what kind of deduction did Daw Aung San Suu Kyi do?”

Prejudice and violence against Rohingya and religious minorities such as Kachin are pushing the risk of dividing the country and back stepping its commendable national reconciliation efforts.These behaviors undermine national solidarity, and upset prospects of peace-building. Rakhines demanded autonomy right from the government, they have a plan to expel all Rohingya from Arakan State.

UN Secretary-General Ban Ki-moon and Burma’s President Thein Sein discussed how to address the root causes of inter-communal tensions in Rakhine State, including through development efforts, on 29 September at the recent UN General Assembly meeting in New York.

The president said the government would address the needs. In reality, Myanmar’s government was given another license to the Rakhine for burning and killing of Rohingya after the President’s return from the trip. They offered the excuse that “we tried to stop Rakhine and Muslims”both sides blame each other, they say they will try to investigate the case.

The Burmese government signed a memorandum of understanding with the Organization of Islamic Cooperation (OIC)in mid-August to facilitate OIC partner organizations’ humanitarian assistance to displaced Rohingya. Rakhine Buddhists not only protest openly against OIC’s involvement but also insult OIC.

Rakhines insult all people whoever support Muslims in Arakan regardless of religion, race and nationality of the supporters. Rakhines can hold weapons and attack Rohingya under the Act Of Law 144, they can kill people under curfew order in Arakan State, who is responsible for “Law and Order” Rakhine authority or Myanmar Government or Daw Aung San Suu Kyi?

Daw Aung San Suu Kyi has advised “Law and Order” for the solution but no one know who and when will implement such law and order in Myanmar, I think after the annihilation of Rohingya and Kachin. As political leaders of Myanmar hold their hand out to America for economic prosperity, mobs of Rakhine Buddhists are killing their fellow citizens, the Rohingya Muslims and leaving their villages into ashes.

The U.S. State Department and famous political leader of Myanmar Daw Aung San Suu Kyi remains silent over the suffering of the Rohingya. Without a solution to the Rohingya issue and Kachin war, it is impossible to process democratic development. Besides, there may be regional and international human right chaos.

I do hope the Myanmar Government can easily solve these problems if it really wants to do so.

(NOTE – I wrote this article for www.salem-news.com on 7th October, 2012 and transferred it to my own website now as a record.)