Myanmar is ready to deceive UNSC delegation with 15 informers 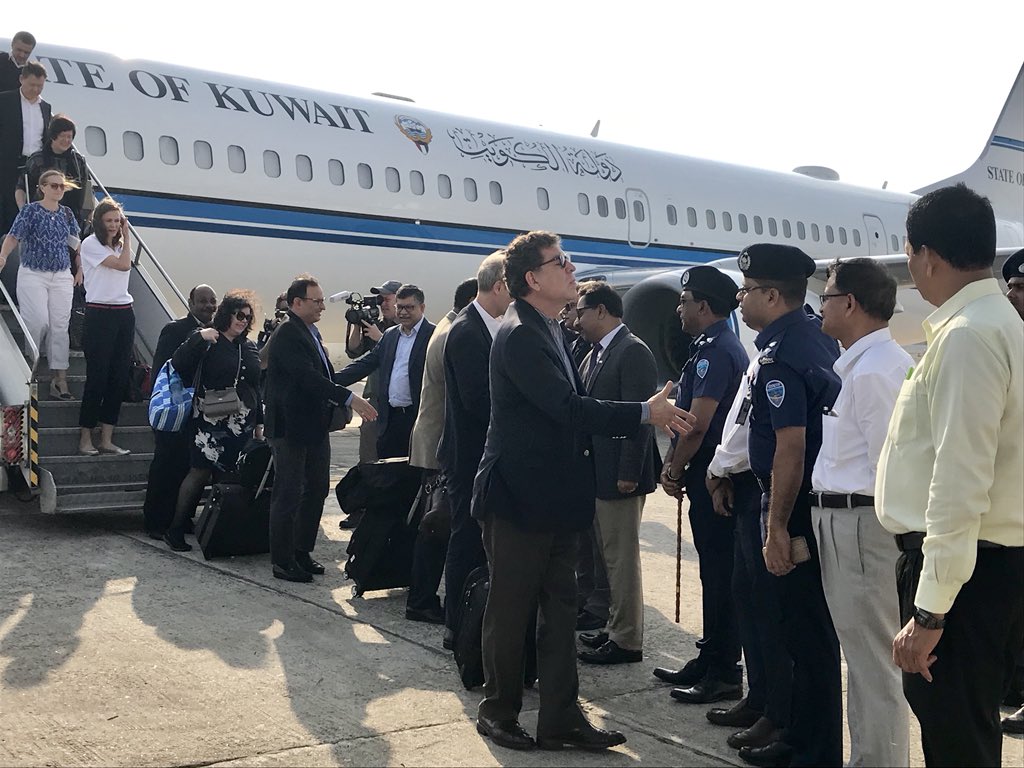 UNSC delegation has arrived in Cox’s Bazar on the first leg of the visiting mission to Bangladesh on April 28, 2018. (Photo: Security Council Report @SCRtweets)

Myanmar Government has arranged 15 Rohingya informers including U Shwe Hla of Aung Mingalar, Sittwe to deceive UNSC delegation before they arrive Myanmar. Informers or brokers in local usage are government lobbies against Rohingya. Myanmar promised international community for safe return of Rohingyas. At the same time, State media spreads propaganda against Rohingya calling them illegal Bengali from Bangladesh.

According to plan, those 15 informers will meet the delegation and express very positive view on government regarding repatriation, National Verification and future plan of governments resettlement process.

Myanmar has been deceiving international community since 1988; rejected the result of 1990 election, made a military back constitution of 2008, created State back violence against Rohingya in the name of communal conflict, spread nationwide violence against Muslims and Christians and lastly, used value of Nobel Peace Prize and democracy for the implementation of Buddhist Neo-Nazi policy.

It has been playing drama over the repatriation of Rohingyas, recommendation of Annan Commission, closing IDP camps in Myebon, Kyaukpyu, Kyauktaw, Minbya, Pauktaw and Sittwe.

Ahead of the UNSC visit, Myanmar prepared and organized some informers to disturb investigation of the delegates, threatened certain Rohingyas not to tell about atrocities of Burmese military and spread propaganda against international community.

Myanmar has shown no sign to resettle IDPs in their own places, build their homes in their villages which had been burnt down by security forces and issue Scrutiny Cards like other Buddhist ethnic of Myanmar. It has been repeatedly spreading propaganda that Rohingya are illegal Bengali and they cannot be considered as Myanmar citizens.

The Myanmar representative who was present at the UNSC meeting where the presidential statement was read out also assured the UN body that his government would continue to work with the international community, including the UN, towards peace and development in Rakhine. But State Policy of Myanmar remains the same anti-Rohingya, anti-Muslims and anti-Christians of military junta in 1990s.

We would like to request UNSC delegation urge Myanmar government to remove Buddhist based Neo-Nazi like policy and fascist slogan hanging every immigration department, stop calling us illegal Bengali, cease attacking on Kachin and Karen civilians, and surcease forcing us to accept genocidal NV(National Verification) Cards.

The ambassadors should urge Aung San Suu Kyi not to deceive the World in the name of implementing the reforms proposed by the Advisory Commission on Rakhine State because genocidal NV card does not include on the commissions report.

The report called for a review of Myanmar’s 1982 citizenship law, which prevents the Rohingya from becoming citizens, and an end to restrictions on the minority group to prevent further violence.

If international community fails to charge genociders bringing them to ICC and protect Rohingya through R2P, Myanmar government will use excessive military force on Rohingya and other ethnics again, delay return of all internally displaced persons to their own places, will express illegal Bengali as the only root cause of crisis instead of the truth, fascist policy of the State, and it will take NVC and persecution as the main recommendation of Annan Commission report.

Bringing all Generals and genociders who committed Rohingya Genocide and atrocities against Kachin and Karen to ICC and protecting Rohingya, Kachin, and Karen through R2P should be the only solution to end Buddhist Fascist Policy in Myanmar. Otherwise, the result of State Policy will bring a horrible regional crisis soon.

Rohingya must be kept in the ghettos ceaselessly: Two Myanmar Ministers