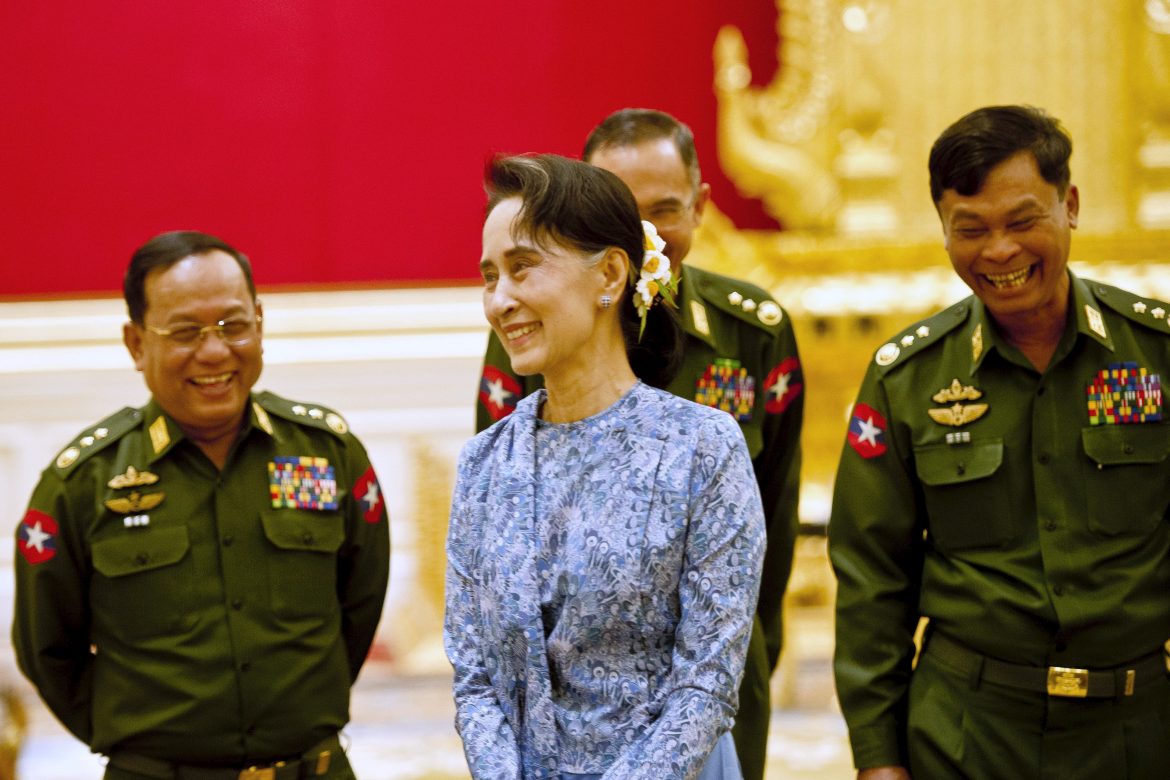 Aung San Suu Kyi, the National League for Democracy party's leader, smiles with army members during the handover ceremony at the presidential palace in Naypyitaw, Burma, on March 30, 2016. (Photo : Reuters)

The West’s “The Lady” who has been being praised as a democracy icon in Myanmar turned her face towards “Ultra-nationalism” rather than establishing democracy after she became State’s Counsellor.

She has been silence in the military’s genocidal operations against Rohingya because she has sympathy only Buddhist majority. Before the election, Aung San Suu Kyi was the Nobel laureate, democracy activist and Myanmar’s main civilian leader but after election, she started lecturing ultra-nationalism like MaBaTha Buddist extremists and genocidaires of Myanmar.

Before election, she criticized the fascist constitution of 2008, 1982 citizenship law and human right violation but when she became State’s Counsellor, rather than amending fascist constitution, she let to assassinate U Ko Ni who strongly opposed the constitution, wants to implement discriminatory law of 1982, supports human right violation saying “there is no such country which does not violate human right”, instead of educating public about democracy and human rights, she spread Buddhist ultra-nationalism saying “We fear Muslims” ” Muslims are dominating” ” Muslims must not be in the Parliament”.

Since 25 August 2017, hundreds of thousands of Myanmar’s Rohingya have fled the country in the wake of a military’s genocidal operation that has turned Rohingya villages into ground zero; ninety percent of Rohingya’s homes in Rathedaung, Buthidaung and Maungdaw have been burnt down, nearly 20000 Rohingya have been killed or missing, more than half a million have refuged in Bangladesh.

Rohingya have been under persecution since 1970. Burmese Military junta has planned to wipe out all Rohingya in 1990 through NaSaKa, Burmese Border Guard Group which included military, police and immigration officers. “NaSaKa confiscated all official National Registration Cards from Rohingya and replaced them with White Cards to make us stateless or illegal Bengali immigrants from Bangladesh.

In 2012, Thein Sein government staged the violence against Rohingya; burnt down eighty percent of Rohingya’s homes in central and southern parts of Rakhine State. More than 140000 Rohingya are still living in the concentration camps and the rest lives under genocidal blockage without having fundamental rights. Former President demanded United Nations to take all Rohingya away and settle them in a third country.

State’s sponsored violence against Rohingya continues in 2013, 2014, 2015, 2016 and 2017. Since 25 August 2017, Burmese military has been committing the worse crimes against Rohingya. This time, they burnt down ninety percent of Rohingya’s homes in western parts of Rakhine State especially Rathedaung, Buthidaung and Maungdaw.

B. Rohingya Mass Graves in Rathedaung and Maungdaw

Who ordered to kill Rohingya civilians?

In October last year, a little group of Rohingya insurgents launched attacks on border outposts in Rakhine State. They killed nine security personnel and seized weapons, in what they said was reprisal for years of mistreatment. Since last week of August, 2017, Myanmar’s army chief, Senior Gen. Min Aung Hlaing, ordered to burn down entire Rohingya civilians and kill as many as the military can in respond ARSA’s attacks on police posts.

An experienced Rohingya teacher from downtown of Maungdaw said ” ARSA is not a group of Rohingya insurgents, it works for military; mostly drug dealers instructed by army commanders. They provided some money and WY narcotic drugs to young Rohingya, persuaded them to attack police posts. All army commanders knew well who organized the attacks of police posts, when and how many people involved in the attacks before the actual attacks.

To avoid international pressure, Burmese generals make a drama of ARSA to show the World that “Rohingya are terrorists”

Myanmar is the only country in South East Asia ruled by ultra-nationalists. During Thein Sein administration, Burmese genociders tried to drive all Rohingya out of the country. Now, under Suu Kyi’s administration, Burmese genociders label “terrorists” on Rohingya to show the World that “Rohingya are a threat for World’s security”. In fact, genocidal operations against Rohingya by the Burmese ultra-nationalists motivate Jihadists around the World for further terrorist attacks in the Globe.

The main purpose of genocidal operations against Rohingya by Myanmar military from 2012 to 2017 is to eradicate all official documents regarding citizenship in the hands of Rohingya through burning their homes and make them illegal immigrants from Bangladesh.