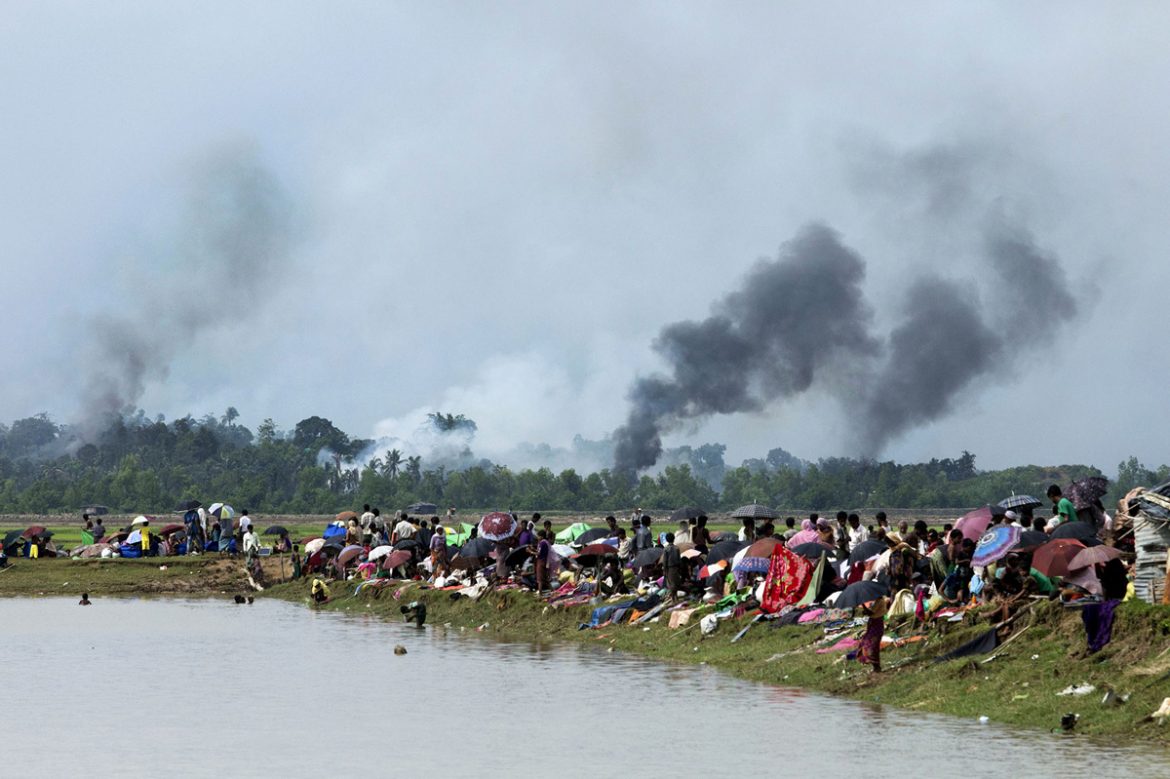 Smoke billows above what is believed to be a burning village in Burma's Rakhine state as members of the Rohingya minority take shelter in a no man's land between Bangladesh and Burma, in Ukhia, on September 4, 2017. (K.M. Asad / AFP / Getty)

Nobel Peace Prize must be for those who contribute for the good of the humanity and the main purpose of Veto Powers in the United Nations Security Council is to maintain peace and security by balancing World’s powers, not to destroy a community to gain political or economic advantages according to the Charter of United Nations.

But attitudes of Aung San Suu Kyi, Chinese and Russian leaders designate destruction of Rohingya supporting Myanmar genociders and Nazi like State policy of them.

Genocidal operations against Rohingya has been continuously going on since 1990 and plan of Rohingya Genocide reached its peak in August 2016 and after 25th August 2017 when some Rohingya insurgents holding wooden sticks and swords attacked the police posts in Maungdaw.

Rohingya homes and villages continue to burn, before, during and after the speech of Aung San Suu Kyi. Rather, police and military extend their genocidal operation against Rohingya to Minbya township of Rakhine State recently.

To complete Chinese Golden Gas Project in KyaukPyu of Rakhine State of Myanmar, Thein Sein regime systematically organized violence against Rohingya in 2012 that caused nearly 200,000 Rohingya internally displaced, and 1000s of them were killed by the mobs and security forces.

More than 140,000 Rohingya still live in the ghetto-like camps of Sittwe, Pauktaw, MyeBon, Minbya, Mrauk U, Kyauktaw, and KyaukPyu.

Rohingya have faced persecution and discrimination in majority-Buddhist Myanmar for decades and are denied citizenship, even though many families have lived there for generations. The government says there is no such ethnicity as Rohingya and that they are Bengalis who illegally migrated to Myanmar from Bangladesh.

Not only the Rohingya face persecution and ethnic cleaning, every Muslim including Kaman ethnic whom Government recognizes as an indigenous ethnic of Myanmar are also facing persecution. Kaman are not allowed to attend school, travel and work freely though they are approved citizens of Myanmar.

Where has hatred and discrimination come from when Buddhism is against them?

After nation-wide democracy protest against the regime in 1988, military junta installed Buddhist Dhammaryun in every street of Myanmar where the State backed monks preach against Islam and Rohingya, and Buddhist worship house are installed in every school where discrimination is being taught to Buddhist children.

Hatred and discrimination rooted in the State policy, not in Buddhist scripture or teaching of Siddhartha Gautama; the name of race for every Buddhist is only one in every Buddhist Identity Cards while for a Muslim, there must be at least two-three names of races be mentioned on their ID cards according to State Policy.

Muslims are considered as mixed blood race or bastard by the immigration department of Myanmar. State media launches preaches of Buddhist monks favoring Buddhists and blaming Muslims and Islam.

In 2011, regime formed 969 Buddhist terror group which was later renamed MaBaTha that organized nation-wide violence against Rohingya and Muslims since 2012.

Can Myanmar be considered a democracy transitional nation?

It will be craziness calling Myanmar which administration relies on fascist constitution of 2008 and ruling party has no right to order the armed forces.

Suu Kyi has limited control over the security forces due to the nation’s “flawed constitution,” which allows the military to remain politically powerful and guarantees it control of key ministries including those related to security and defense.

Director at the Ministry of Information’s News, Zaw Htay whose job is spread propaganda against Rohingya, Islam and Muslims through national media, is one of the faithful army officers of genociders.

Since 1988, no sign of educational program regarding democracy, human rights, and constructive thought has been being launched from the State Media.

Without public awareness of democracy and human rights, transition is impossible. Though Suu Kyi urged not to use the term “Bengali and Rohingya” for Rohingya but State media and officials always refer them as “Bengalis” and insist they are illegal immigrants from Bangladesh, even though most have lived in the country for generations.

Ignoring rights of minorities and ceasing the genocidal program against Rohingya, it is impossible calling a transitive period for democracy in Myanmar.

No conflict, no communal violence, there is only a State’s program of ethnic cleansing

2012 violence against Rohingya was labeled as a communal conflict by the regime and mass killing and burning of Rohingya by the Myanmar military was named “terrorist attacks of ARSA” in August 2017.

The government blames the attacks on the self-styled Arakan Rohingya Salvation Army (ARSA), the Bengali Terrorist group behind the attacks on police outposts.

Since 25th August 2017, 1000s of Rohingya including babies were slaughtered or burnt alive by Myanmar military and Border Guard Forces in Rathedaung, Buthidaung and Maungdaw.

The government says most of the accusations of abuse are fabricated and “fake news”. Brigadier General Thura San Lwin, commander of Myanmar’s Border Guard Police, said some villagers had made what he said were erroneous claims and were subsequently charged and jailed for lying to the authorities.

Myanmar has been deceiving the World by not allowing reliable international media to the ground. As United Nations mentioned truly “a textbook example of ethnic cleansing”, there is no conflict, no communal violence, using ARSA as an excuse, State is committing ethnic cleansing of Rohingya.

Veto Powers must be to save Rohingya from cleansing

As President Trump said in his historic address to the General Assembly “I firmly believe that the U.N. must act to make its peacekeeping operations more efficient, more effective, more accountable, and more credible”, veto powers should immediately take action against genociders of Myanmar.

If China or Russia opposes any decision of United Nations regarding Rohingya issue, the Global Community leaders should start world-wide campaign to boycott their products.

The United Nations is bound by its charter to foster “International cooperation in promoting and encouraging respect for human rights and for fundamental freedoms for all.

” According to UN investigation, Rohingya became the most persecuted people on Earth since 1970s. Now, as they are facing ethnic cleansing, all veto power holders are responsible to save Rohingya; establish peace zone for them.

Hundreds of journalists are witnessing a historic exodus. Nearly 400,000 Rohingya including tens of thousands of children have now been forced to flee from Burma to Bangladesh since 25th of August 2017.

As President Trump called on the Security Council and the United Nations to take strong and swift action to bring Rohingya crisis to an end and give hope and help to them, to end ethnic cleansing and restoration Rohingya’s rights is crucial for all World’s leaders.

If Rakhine extremists led by Dr. Aye Maung refuse peaceful coexistence, both Rakhine and Rohingya live peacefully as they have lived for centuries, United Nations should make a decision for secure state for the Rohingya.