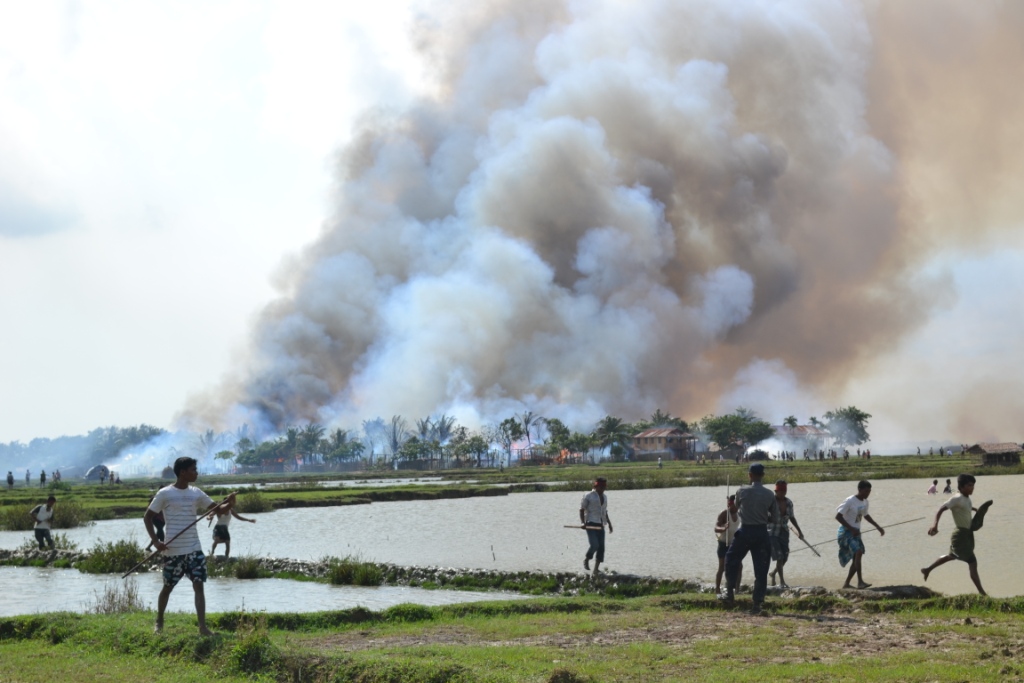 Buddhist Rakhine with weapons walking away from Rohingya village after they set fire while a police stands in June, 2012. (Photo : Human Rights Watch)
Your Excellency, We would like to appreciate the US and UN’s involvement to investigate the human rights violations in the Arakan State of Myanmar. We welcome the team to observe Rakhine and Myanmar Government’s crimes against humanity.
Since June 8, 2012, thousands of innocent unarmed Rohingya people have already been killed by security forces, Rakhine militants, and Rakhine armed mobs. Thousands of Rohingya peoples’ houses had been burnt down, and their properties had been looted. We sent thousands of Rohingya victim photos and videos to the world media. Innumerable articles were written regarding the Rohingya issue by hundreds of scholars. Hundreds of organizations have been trying to resolve this problem, but it is still unsolved.

Rohingya people are the most senior indigenous ethnic group of Myanmar but they are the most persecuted and alleged as illegal immigrants from Bangladesh.

Large majorities around the world endorse a stronger role for the United Nations. They support giving the UN a variety of expanded powers, including having a standing peacekeeping force; the authority to investigate human rights violations; and the power to regulate the international arms trade.

Large majorities around the world favor the United Nations having the right to authorize the use of military force for a wide range of contingencies. The approval of the UN Security Council plays a powerful–and in many cases a necessary–role in conferring legitimacy on the use of military force. Perhaps most dramatic, equally large majorities approve of the United Nations using military force to forcibly deliver urgent humanitarian aid if the relevant government tries to block the aid, and to protect people from severe human rights abuses even against the will of the government.

Hence, we brings the concerns of the Rohingya people and Rohingyas’ citizenship issue as following:

1. We appeal to the UN delegation and world leaders to visit inner Rakhine State including all townships and meet the family members of abducted Political activists , raped women and girls, victim people, and see their miserable lives.

2. We appeal to the World leaders to have a look how Myanmar government and Rakhine State authority have been cleansing Rohingya ethnic.

3. Myanmar’s judiciary is under the influence of army and it failed to give justice to Rohingya people. We have no faith on any institutions of Myanmar and Rakhine.

4. We appeal the World leaders to inquire from Myanmar judiciary that why have they failed to deliver justice to Rohingya general public.

5. We appeal the World leaders to treat Rohingya detainees currently held by Rakhine State security forces as prisoners in accordance with UN charter and International Laws.

6. We appeal the World leaders to restore Rohingyas’ citizenship rights as they are an indigenous ethnic of Myanmar.

7. We have enough evidences that Myanmar Government had committed a crime against humanity.

8. We have available historical documents and proofs including current Myanmar government’s official documents which indicates that we , Rohingya people, are an indigenous ethnic of Myanmar.

9. Rohingya issue became an international issue since 1970 but still unsolved, don’t the World leaders have enough power to solve this problem?

10. Myanmar government and Rakhine people are trying to implement Neo Nazi Racism in Myanmar which is unacceptable in this 21st century.

11. In Myanmar, there is no religious freedom; especially Christians and Muslims are under severe persecution, where is the international law to restore our rights?

12. We do hope that the World leaders could solve our problems as soon as possible.

13. There are some aids groups and diplomatic delegations who reach Arakan State but Rohingya people are still in danger. Foreigners are not allowed to go freely and investigate freely; 9th September 2012, US Ambassador came here in Sittwe and Lawyer U Kyaw Hla Aung had a little chance to express his feeling, the next day, Prime Minister of Rakhine State warned him strongly not to talk with any foreigners again, today, when OIC delegation came U Kyaw Hla Aung was not allowed to meet with them.

14. Myanmar government has been deceiving the World Leaders since 1988, why don’t you try to take any action, what do we need to present to you in order to take action and solve the problems?

15. Myanmar Government claimed that there is no Rohingya in Myanmar, we have thousands of official documents sealed by officers which proves the existence of Rohingya. 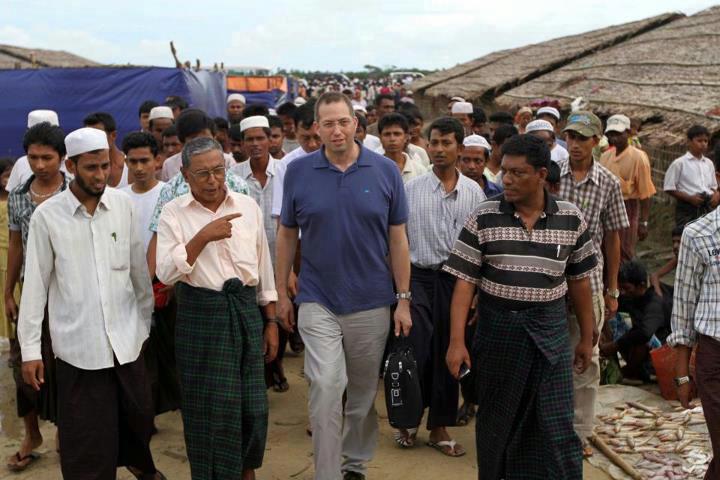 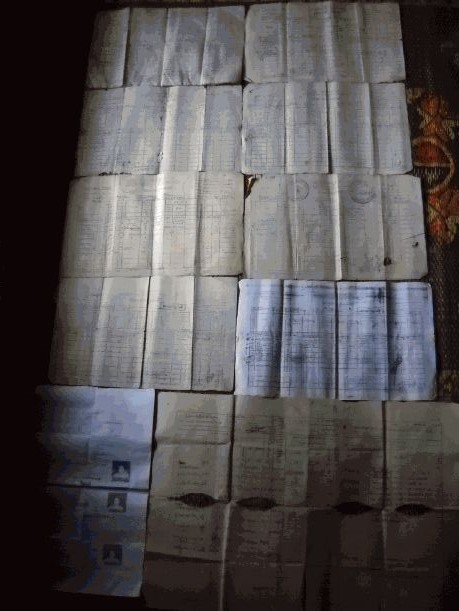 1000s of official family lists where the race shows Rohingya

(NOTE – I wrote this article for www.salem-news.com on 13th September 2012 and transferred it to my own website now as a record.)