Repatriation impossible before all IDPs resettle in their own places 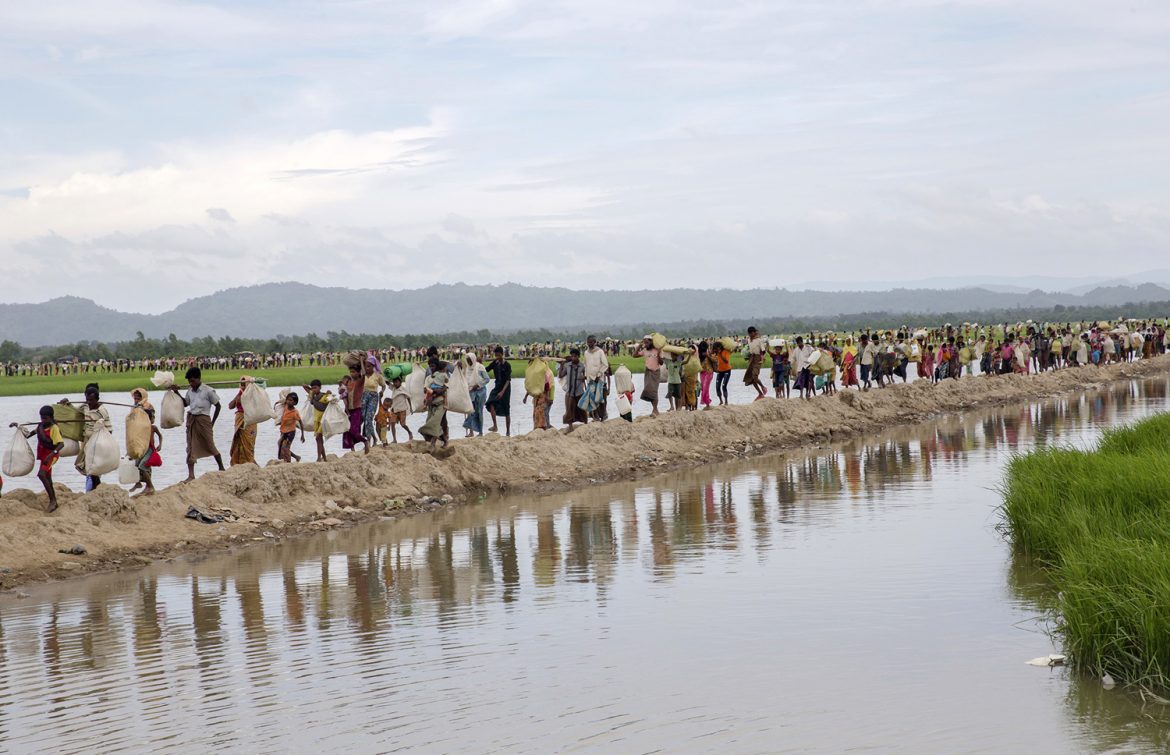 Rohingya Muslims, who spent four days in the open after crossing over from Burma into Bangladesh, carry their children and belongings after they were allowed to proceed towards a refugee camp, at Palong Khali, Bangladesh, on October 19, 2017. (AP Photo/Dar Yasin)

More than 140000 internally displaced persons(IDPs) of Rohingya have been miserably living in the concentration camps of Sittwe, Pauktaw, MyeBon, Kyauktaw and Kyauk Pyu since 2012. The Former Thein Sein government staged 2012 and 2013 violence to calm down Rakhine Buddhists who protested against Chinese Golden Gas Project in KyaukPyu and to eliminate all Rohingya from Arakan land.

The Myanmar government has been deceiving the World leaders that “Rakhine Issue is a Communal conflict between Rakhine and Rohingya”. In reality, “Rakhine issue” is “State’s plan for Rohingya Genocide” to please Rakhine Buddhists and complete Chinese projects in Arakan State.

Hundreds of thousands of Rohingya have been fleeing Myanmar for nearly three months, more than 600,000 Rohingya are living in makeshift refugee camps in neighbouring Bangladesh and the governments of the two countries have signed a deal to send the refugees back to Myanmar. Myanmar government has no intention resettling IDPs in their own places.

Suu Kyi government has been forcing Rohingya to accept genocidal identity cards called “NVC” instead of issuing Scrutiny cards like other ethnic in Myanmar. In this situation, repatriation is impossible.

Rights groups have accused Myanmar’s military of atrocities, including mass rape, against Rohingya during the clearance operation. Myanmar’s de facto leader Aung San Suu Kyi said “We can’t say whether it has happened or not. As a responsibility of the government, we have to make sure that it won’t happen,”

I would like to ask Suu Kyi “Do you know we have been in concentration camps since 2012? What is the reason of not resettling us in our own places? Do you know your government has been forcing us to accept genocidal “NVC” which is mentioned in no law of Myanmar?

Labelling us Bengali, issuing “NVC“, keeping us in the ghettos, mass killing, mass rape, torture and burning ninety percent of our homes are State’s plan of Genocide. It is more than ethnic cleansing.

Rohingya crisis: Not only ethnic cleansing, a clear-cut Genocide

Jews under Nazis’ Democracy and Rohingya under Burmese Democracy transition