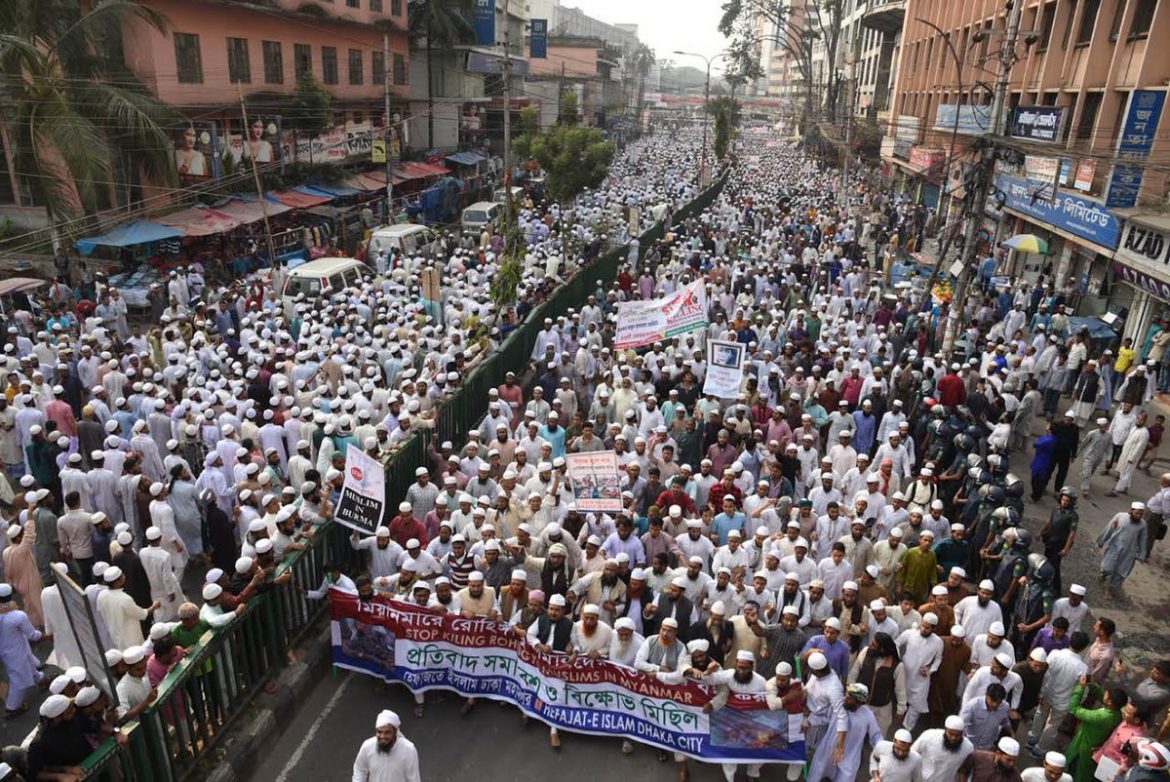 Bangladeshi activists of several Islamic groups march in a protest rally against the persecution of Rohingya Muslims in Myanmar, after Friday prayers in Dhaka, Bangladesh on November 25, 2016. (Photo - Khaled Saifullah)

Myanmar’s State-run media and all Buddhist media have claimed that international journalists and human rights groups are working hand in glove with terrorists. Supporters of Genociders, two Nobel Laureates; Daw Aung San Suu Kyi and Kofi Annan are busy to conceal Rohingya Genocide expressing it a problem and tension between two communities.

They have alluded to Rohingya as a ‘thorn’ that ‘has to be removed,’ and as ‘detestable human fleas. Rohingya became the most persecuted minority before the birth of Bangladesh and with its independence, Burmese regime forced 300,000 Rohingya to flee to Bangladesh in 1978 that damaged stability of Bangladesh. Though Burmese regime received most of the refugees under supervision of UNHCR, it accelerated persecution and forced them to flee.

Thein Sein Government staged genocidal violence against Rohingya in 2012 and kept them in the ghetto-like situation; accusing them illegal immigrants from Bangladesh, saying they would be kept in concentration camps until any third world country resettle them in any part of the World. The same word was used by Commander-in-Cheif of Defence Service of Myanmar, Senior General Min Aung Hlaing on 6.12.2016, after two months of genocidal operations.

Mass killing including babies, gang-rape of Rohingya women and girls, torching 1000s of Rohingya’s homes by Myanmar army and Border Guards within two months caused 1000s of influx into your country. Nobel Prizes are being used to conceal all those atrocities of Myanmar troops by Daw Aung San Suu Kyi and Mr.Kofi Annan whom Rohingya expected a positive result but they treat Rohingya worse than regime in their actions.

Myanmar’s Generals who are Genociders of Rohingya changed the noble term “Bengali” into a “derogatory word” to eliminate Rohingya and Muslim in Myanmar. Using the term “illegal Bengali Kalars”, which is exactly the same terminology of Hitler against Jews in Germany, Myanmar planned to endanger sovereignty of Bangladesh with Rohingya’s exodus to Bangladesh.

Suu Kyi still enjoys support from the masses that catapulted her party into power. The NLD was elected on the impractical dream of a wholesale political makeover: under military rule, civil war devastated minority populations; corruption was rampant; economic, educational and medical institutions fell into disarray; and a drug crisis took root among marginalized minority youths.

Majority Buddhists side with the government and the military in their belief that Muslims who call themselves Rohingya have no legitimate claim to rights in Myanmar. While Suu Kyi has never publicly articulated this attitude, she has advised diplomats not to refer to them by their chosen name.

Suu Kyi doesn’t want to solve national identity issue denying existence of Rohingya ignoring 100s of official documents and history, and eradicating Rohingya from history Burma. So long as she refuses to address reality regarding Rohingya, her government will continue to be plagued with problems that she and the senior leadership of the NLD don’t consider priorities; that is, until they become crises, at which point she has now shown her only response to be turning over responsibility to the army. That’s hardly leadership, and it’s dangerously close to complicity.

Unlike Bangladesh where many Buddhists enjoy equal rights, Myanmar’s State Policy does not recognize Muslims as citizens. Though many Muslims have Scrutiny Cards like Buddhists, their ethnicity in their cards are systematically described in a controversial way; a Muslim’s ethnic must be at least three different names of race including Bengali.

Daw Aung San Suu Kyi’s NVC card program for Rohingya and Muslims is 100 times worse than 1982 citizenship laws. Before election, she said “1982 Citizenship law must be amended according to international standard but her new program of NVC is worse than that.

We appreciate all Bangladeshi’s solidarity with Rohingya. We would like to suggest that Bangladesh should strongly warn Myanmar not to use Bengali that endangers sovereignty of Bangladesh and a tool for Rohingya Genocide. Secondly, Bangladesh authority should stop influx narcotics such as WY and others into Bangladesh.

The main drug dealers in Myanmar are army officers. Thirdly, Rohingya issue that harms peace and security of Bangladesh should be solved with the help of International Community. Issuing Statements by UN or any other organizations and States are not solution. Genociders of Myanmar should be brought to ICC for trial to end refugee crisis.