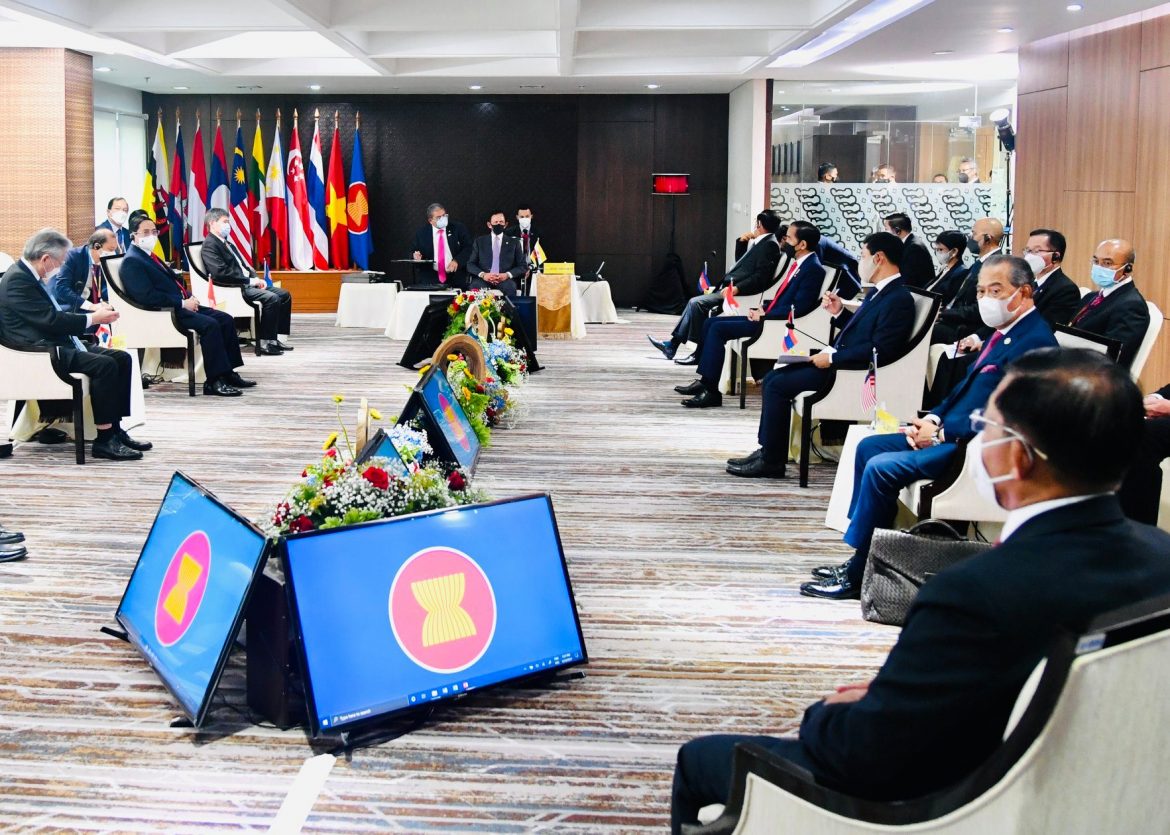 Leaders of the Association of Southeast Asian Nations (ASEAN) meet in Jakarta, Indonesia, April 24, 2021, in the first coordinated international effort to ease the crisis in Myanmar. (Courtesy President Secretariat)

The international media has reported that the overthrow of Aung San Suu Kyi, who won a clear election in 2020 for the National League for Democracy, will have an impact on the future of Rohingya refugees in Bangladesh. General Min Aung Hlaing claims that the clearance operations of 2016-17 were conducted under the supervision of Suu Kyi government.

Under the civilian government, the military held power of defence, Judiciary, general administration and rule of law. Although Min Aung Hlaing could control main power of the country, he might believe that only a coup d’état could help him to be freed from the genocide case. China seems to have advised Min Aung Hlaing in the same way. According to some Rakhine political analysts there is an agreement between China and Bangladesh on Rohingya refugees issue.

The international community is calling for the safe return of Rohingya to their home with dignity. In 2017, large numbers of Rohingya were expelled from Rakhine State, and more than 400 Rohingya villages were set on fire through clearance operations of Burmese army. The Burmese military has brutally massacred thousands of Rohingya, including children. Many children were burned alive and many Rohingya women were also raped by the Burmese army. As a result, Burma’s military leaders are facing trial at the ICJ. The AA sent two witnesses to the Netherlands as a support of Genocide case.

The Bangladesh authority wants the refugees to be evacuated as soon as possible. Efforts to relocate to a remote low-lying island in the Bay of Bengal is one of major project of Bangladesh. In the meantime, even before the coup, there was evidence that the Burmese authorities showed no intention for Repatriation of Rohingya and humanitarian aid is also needed to begin resettlement programs in Burma. Repeated fires in Rohingya refugee camps in Bangladesh along with the coup had political implications.

The Rohingya must be allowed to return home with dignity under international law, but the situation in Rakhine State is not safe for the Rohingya. Experiences from other contexts on the Bangladesh-sponsored Global Refugee Convention teach refugees how to integrate refugees into regional development projects and social protection frameworks. But the conditions of Rohingya IDPs inside Rakhine State are abject fragile: Rakhine’s biggest political party ANP cooperates with military junta, the AA was promised for confederation like “Wa” State of Burma by the junta and many extreme Rakhine politicians do not want to resettle Rohingyas in their own places burned in 2012 and 2013.

During ASEAN summit, on April 24, Min Aung Hlaing might agree something with Malaysia regarding Rohingya issue. For that reason Prime Minister Muhyiddin Yassin told Asean leaders that Malaysia wants Myanmar asylum seekers, including Rohingya refugees, to be granted “safe return” due to “anti-refugee sentiments” in the country. Finally, to review the coup of Min Aung Hlaing, we can surely say that he wants to use Rohingya Genocide victims as an opportunity to escape his genocide case.

We Rohingya in the ghettos of Rakhine State would like to demand:

(1) Resettlement of all IDPs in their own places and return all their shops and lands.

(2) Restoration of all our rights including citizenship rights.

(3) If there is repatriation, there should be R2P for the security of Rohingya.

(4) If Rakhine is provided confederation, Rohingya should be provide confederation of Frontier Area according Panglong Agreement of 1947.

(5) To cure decades long deprivation of educational rights under the regime, Rohingya should be provide quality education.

(6) If International Community has no power for safe and dignified repatriation of Rohingyas then provide arm training for 5000 Rohingyas to fight for their own rights.

Breaking News: Need help to save prisoners from torturing