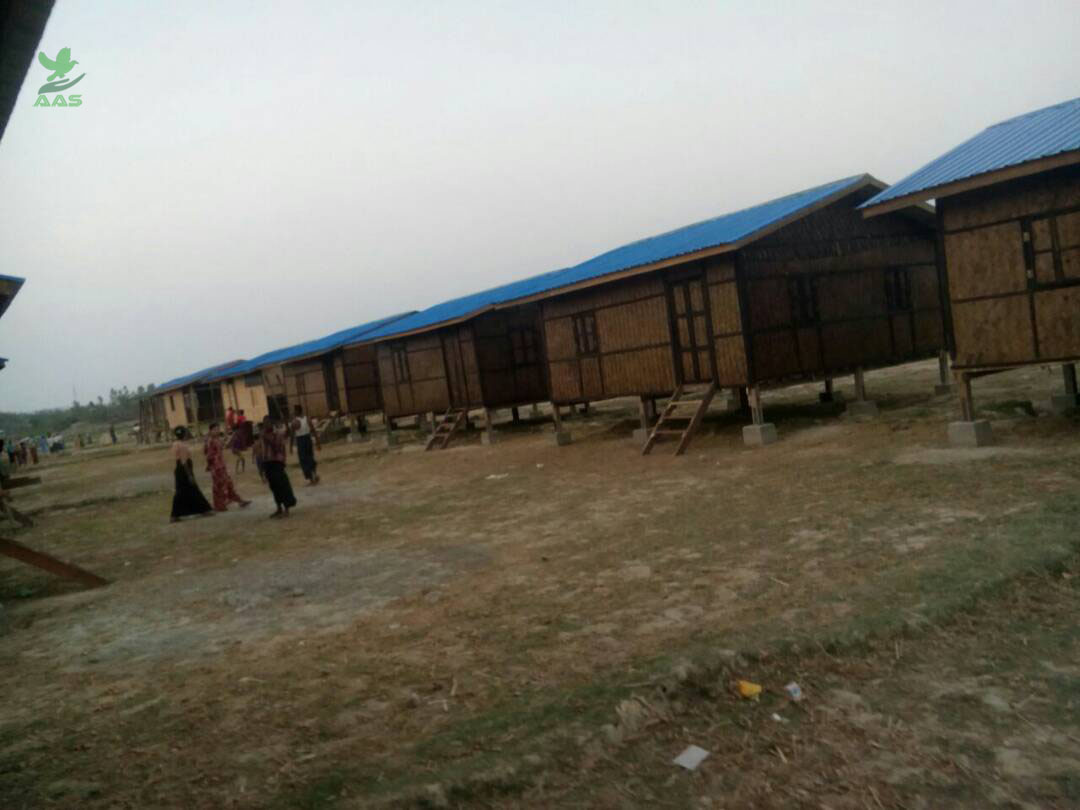 Photo : This is the new concentration camps built for IDPs in Myebon in the name of closing down IDP camp by Myanmar government. The picture was taken on April 29, 2018.

Thousands of Rohingya in Sittwe, Myebon, Pauktaw, Kyauktaw, Minbya and Mrauk U are exciting to welcome UNSC team and express their feelings.

Desperate Rohingya who have been in the Aung Mingalar ghetto of Sittwe are exciting to meet UNSC Ambassadors. Most of those Rohingya had shops in Central (Myoma) Market of Sittwe and worked peacefully with Rakhine before 2012. Thein Sein Government staged violence and named it Communal Conflict in 2012. Rohingya have been in the ghetto since that time.

“I had a shop in Myoma Market. Most of my customers were Rakhine. There was no problem. Government made 2012 violence against us and keep us in the ghetto. We have no right to work, attend school and get medical access. We are not allowed to go out. Our life in this ghetto is worse than Jews during Nazi era.” said Musafir from Aung Mingalar ghetto of Sittwe.

Nazu Miah, a Rohingya fisherman from Thae Chaung of Sittwe told that for nearly two months, security forces did not allow them to fish for not accepting National Verification Cards. “When my family was starving, I agreed to take it to save my family.” said Nazu. Gaffar from Pauktaw expressed his feeling that they could get enough food before 2017 though they were in the concentration camps but now there are ten times more restrictions than before.

In the name of closing IDPs, government is forcing internally displaced persons either to leave somewhere or move another concentration camp which is worse than current camp. “Fifty houses were built-in the sunny paddy field as if built a new concentration camp and forced us to move there. How can we go there. There is no hope to find food and WFP may not provide us rice. Town Administration threatened us to move there.” Hasan Ali from Myebon camp hopelessly described.

Myanmar authorities consider Rohingya to be illegal Bengali from Bangladesh though they have lived since centuries ago. State media has been using the term “illegal Bengali” for “Rohingya,” as a State Policy to eliminate them. “We are not allowed to go out and have no fundamental right . Authority had killed hundreds of us. Now, as they force us to leave in the name of closing IDP, only few people remain in the concentration camp.” Maung Tun Thar said on phone.

Fleeing Rohingya refugees have reported killings, rape and arson on a large-scale. The United States and the United Nations have described the Myanmar military operation as ethnic cleansing. A Kaman student, Htun Chay from ThaYarGone of Sittwe angrily told me that not only Rohingya, they are also under persecution.” Like you, we have no right to attend school, work freely and get medical access. As Kaman organization appealed the government several times, it allowed us to build a school in our village. I feel it a segregation and discrimination for being Muslim.” Htun Chay continued.

Today, I called my friends live in the ghettos of Myebon, Pauktaw, Kyauktaw, Minbya, Mrauk U, Buthidaung and Maungdaw to ask them if they want to convey any message to UNSC team or not. All of them told me if they had chance to see the team, they would like to express their situation in detail. They are very exciting to see the team and ask help for saving them from genocidal ghettos. Myanmar government has been continuously deceiving the World and committing crimes against Rohingya since 1965. UNSC delegation’s visit to Myanmar is considered as a last hope by most of the Rohingyas.

These are the new concentration camps for IDPs built-in Myebon in the name of closing down all IDP camps by Myanmar government. The pictures were taken on April 29, 2018.

Myanmar is ready to deceive UNSC delegation with 15 informers