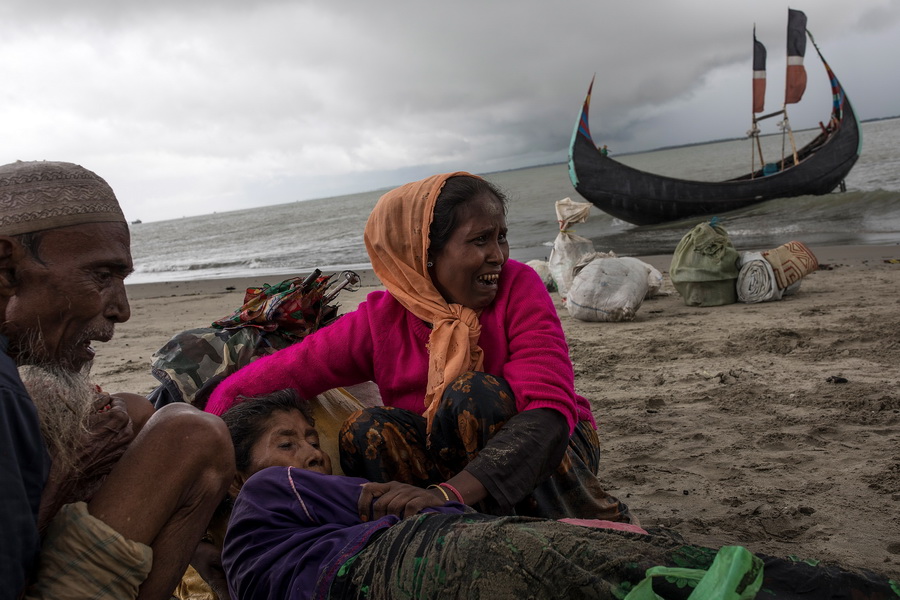 Rohingya refugees comfort an elderly woman, after the wooden boat they were travelling on from Myanmar crashed into the shore and tipped everyone out on Sept. 12, 2017 in Dakhinpara, Bangladesh. (Photo: Dan Kitwood/Getty Images)

All conflicts or wars around the World are different with their particular history and reasons.

Most of them cause based on injustice within societies as people are more aware of inequalities. Injustice continues to be a key source for internal conflicts, instability and human suffering. Wars are a major cause of poverty, underdevelopment, and ill health in poor countries.

To reduce the likelihood of wars it is essential to promote inclusive development; reduce inequalities between groups; tackle unemployment; and, via national and international control over illicit trade, reduce private incentives to fight. Building bridges of peace and stability is possible by committing to accept everybody in their respective positions and preparing a seat for everyone in our hearts.

Most of the refugees around the World are Muslims and almost all persecuted people live in the globe are Muslims, why? God Almighty declares that killing an innocent person unjustly is like killing all of mankind and saving a person’s life is like saving all of mankind.

Why do most of the Muslim lands become killing fields of innocent civilians? Establishing justice on Earth is an obligatory responsibility for Muslim leaders but unfortunately, most of the so-called Muslim leaders fail to establish justice in their own countries.

” Justice must be established without border, without discrimination based on race, color or religion.

God Almighty honored mankind in the Quran: Assuredly We have honored the children of Adam (with many distinctions): We have sustained their traveling on the land and the sea, and provided for them (their sustenance) out of pure, wholesome things, and preferred them above many of those whom We have created with particular preferment.(17:70)

Justice is a vitally important Islamic discipline. Full justice is submitting to God through excellence in worship and devotion to doing good deeds. God enjoins justice (and right judgment in all matters), and devotion to doing good, and generosity towards relatives; and He forbids you indecency, wickedness, and vile conduct (all offenses against religion, life, personal property, chastity, and health of mind and body). He exhorts you (repeatedly) so that you may reflect and be mindful! (16:90)

God Almighty and His Messenger Muhammad (SAW) have guided humanity in every aspect of life. They have also guided us in matters of selection of our leader who can lead us. Everyone has different perceptions related to the choice of leadership. But we have to consider Quran and Sunnah when we have to specify leadership qualities of our leader.

O you who believe! Be upholders and standard-bearers of right for God’s sake, being witnesses for (the establishment of) absolute justice. And by no means let your detestation for a people (or their detestation for you) move you to (commit the sin of) deviating from justice. Be just: this is nearer and more suited to righteousness and piety. Seek righteousness and piety, and always act in reverence for God. Surely God is fully aware of all that you do.( 5.8.)

We can fix all our problems with education. The more we know, the more we love the reality. If we don’t know anything about what it means to be a human being, how are we going to love them? If we just do religion without science, we get ignorance. If we do science with no religion, we get atheism. The combination of both is what we need. Education success is not only in science. Morals, manners, and religious values are also very important in the implementation of life.

We should educate the students with love and attitude, moral and religious values. Educate people who will be useful and contribute to his/her people and countries positively and also for all world people and teaching our students living with harmony with other nations and religions. Quran and Sunnah encourage us for pure education.

After the battle of Badr, it was declared that educated persons (unbelievers) could become free if they taught ten boys (believers) how to read and write. Instead of killing each other for the sake of power, Muslims must respect human value.

Messenger of God said “None of you [truly] believes until he wishes for his brother what he wishes for himself. This Hadith emphasizes the importance and virtue of the mutual obligation of all Muslims to love one another; only then can one be counted as a true believer. Loving one’s brother includes wanting for him/her everything believed to be good in the material and the spiritual sense. Islamic brotherhood lays responsibilities on its members to stand by one another and be genuinely interested in the welfare of each other.

Between individuals, Muslims might put the teachings into practice in their daily lives by showing compassion and caring for others in need. They should share good fortune, wish the best for others, and not be envious, selfish, and dishonest or attempt to cheat, tell lies or exploit others.

To act upon the teaching would mean that there would be no evil in society. Muslims should consider all other Muslims equal members of one Ummah and not think of themselves as more deserving than others. Unfortunately, so-called Muslim leaders become enemies of education; they are busy labeling terrorists to their opponents, killing and arresting innocent people who criticize their ideas and policies, instead of raising voice for the persecuted people such as Rohingya, Uyghur, Palestinians, Kurds, they took sides of oppressors.

To maintain their powers, Muslim leaders take either East side or West and kill own people in the name of Islam or terrorists or rebellion. Uyghur are put into concentration camps of China. Rohingya have been facing genocidal atrocities of Myanmar. Minorities in Iran, Syria, and Turkey- Sunni, Kurds, Gulenists – have no basic rights at all. Muslim leaders should be role model to establish justice on Earth.

Supplication of Rohingya in Sittwe ghetto on the...

Supplication of Rohingya in Sittwe ghetto...