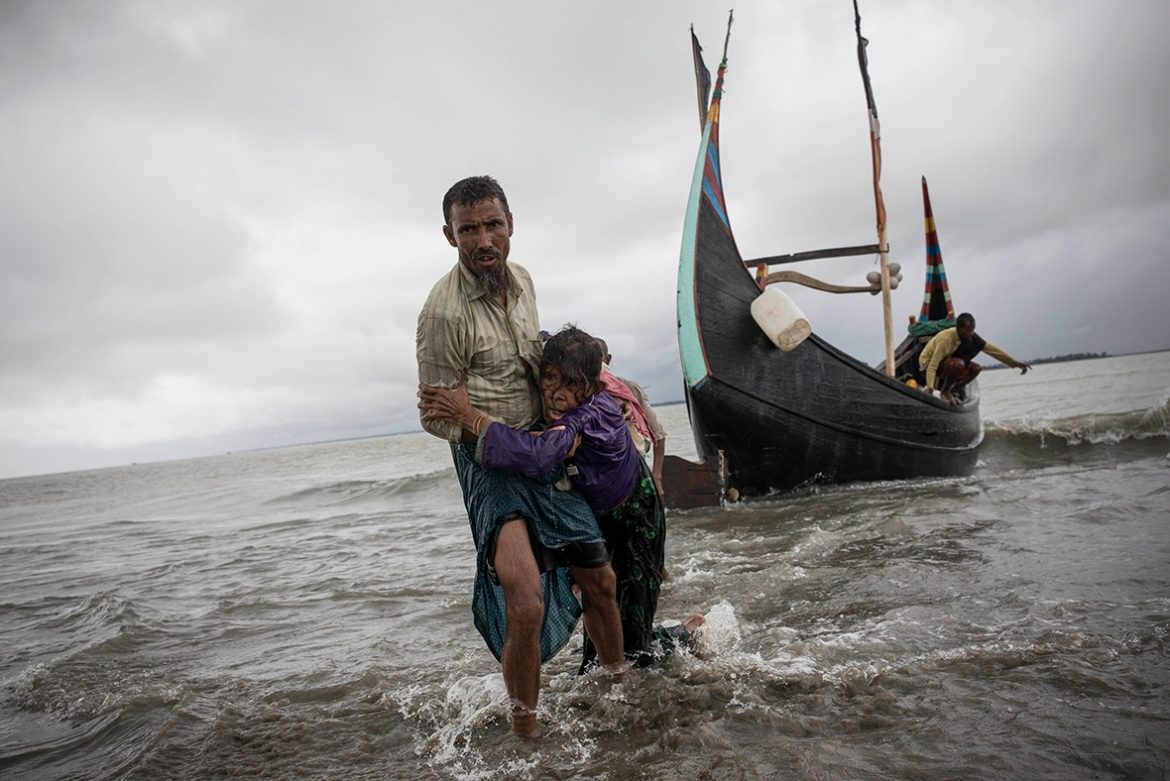 A Rohingya man carries an elderly woman, after the wooden boat they were travelling on from Myanmar crashed into the shore in Dakhinpara, Bangladesh, and tipped everyone out (Photo : Dan Kitwood/Getty Images)

The term “Terrorist” becomes a license for majority to destroy minorities: Rohingya cleansing in the name of communal conflict and terrorists.

Ninety-five percent of Rohingyas’ homes in central and southern Arakan were burnt down by State backed mobs in 2012 and 2013 in Myanmar. More than 140,000 Rohingyas are still living in IDP Camps of Sittwe, Pauktaw, MyeBon, Minbya, Kyauktaw, KyaukPyu and Mrauk U.

The World leaders failed to push on Myanmar government resettle those IDPs in their own places in five years that encouraged Myanmar’s Genociders to wipe out all Rohingya from Arakan land.

Like other countries, the perpetrators accused terrorists to the victims and continued genocidal operations against Rohingya. US, Russia, China, Syria, Israel, Myanmar and other countries use the term “terrorist” to gain their particular goals.

Every leader should avoid going to extreme in his or her thinking and actions. Going to extreme is a lethal poison for the country as well as for the whole humanity. Using propaganda, false allegation and terms unjustifiable, prejudiced and inequitable decisions and judgement may bring forth extreme sentiment among the persecuted people.

Since 1988, General Than Shwe remains the sole despot and Min Aung Hlaing is his the most faithful commander. To turn public attention aside from democratic movement, military junta established Buddhist Dhammaryun in every street of Myanmar after 1988 nation-wide democracy protest.

To hold core power, junta approved a fascist constitution of 2008 which is the main barrier of democracy in Myanmar.

Most of the World leaders focus on Aung San Suu Kyi as key figure of Myanmar to solve human right violations and establish democracy. Though she could form a government she could not be able to keep her promises amend the constitution.

When US foreign minister John Kerry visited to Myanmar, she requested him to avoid both sensitive terms; Bengali and Rohingya but when he left, all State media used the term Bengali for Rohingya.

She tried to console World Leaders that she hired Kofi Annan Commission to solve Rohingya issue but General Min Aung Hlaing who opposed the recommendation of the Commission drew attention of the leaders towards “terrorist issue” and destroyed ninety-five percent of Rohingyas’ homes in Rathedaung, Buthidaung and Maungdaw.

Under Myanmar’s fascist constitution of 2008, Suu Kyi does not have control over the army. It is independent of her civilian-led government, civilian government cannot order any armed force .

The army controls the police, security services, prisons, border affairs and most of the civil service including the State press and also appoints 25 percent of the members of parliament.

“We’ll face genocide, and you all will be a party to it.”

A message to the world from a Rohingya. pic.twitter.com/1Br49cjV39

Modern Hitler Xi Jinping will be a threat for mankind soon. He has been committing #Uyugher Genocide and involved d… https://t.co/mj5CXC80y9