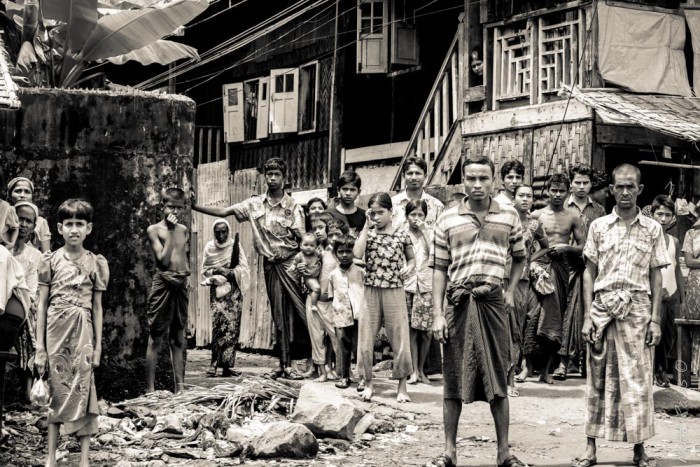 Rohingyas stand on a road in Aung Mingalar ghetto of Sittwe, in 2012. (Photo : Lux Capio Photography)

O’ one profusely generous! We are in the abject poverty. We refuge in your generosity.
O’ the bestower of bounties! Bestow abundant bounties on us.

O’ Provider of all creatures with sustenance! Provide us sustenance.
O’ the Judge of creatures! You know we have been being treated unjustly by the enemies of humanity and those who have power to establish justice on Earth fail to do so in five decades.

O’ the Hearer of complaints! Accept our complaints and change minds of leaders to stop genocidal persecution on us.
O’ the Releaser of prisoners! Thousands of innocent Rohingya are in the prisons. Myanmar authority arbitrarily arrests Rohingya in daily basis. Help releasing all Rohingya prisoners.

One Who is the Creator of everything! Help us to stand for our own identity.

O’ One Who shall continue existing even after everything is perished! Myanmar government has been eliminating our name, our culture and history. Mercy on us to exist.

O’ one Who has the knowledge of everything! Myanmar dictators deprive our rights of education unjustly. We seek refuge in Your knowledge. Increase our knowledge and give us strength to serve humanity.

O’ the Highest Authority of all the authorities! Help to end Rohingya Genocide and facilitate safe repatriation of refugees in Bangladesh.
O’ the Quickest Reckoner! Punish all culprits who committed Rohingya genocide.

O’ the best recognised of all the recognised! Recognize our name and rights.
O’ the Most Praiseworthy of all those who are praised! Reward all of those who have kind heart on Rohingya and all persecuted people on Earth. Increase number of righteous people in order to establish justice on Earth.

O’ the Most Liberal Who is besought! Liberate all persecuted people including Rohingya on Earth.

Rohingya: Justice can bring peace and...