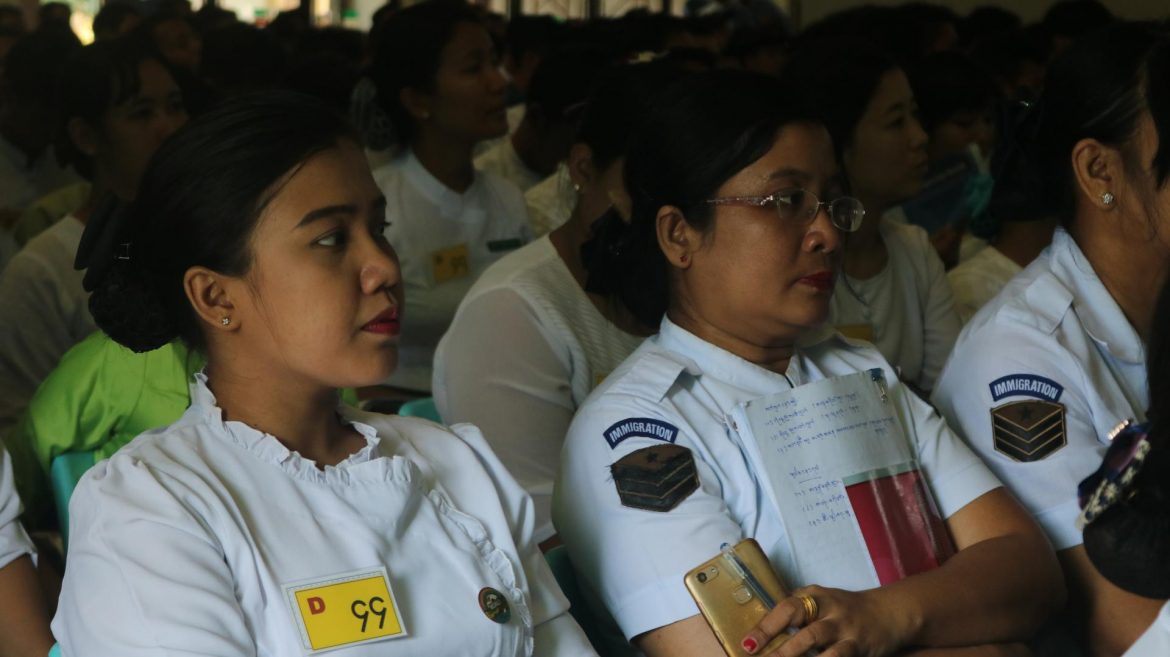 Central institute of civil service (Upper Myanmar) Zebingyi, Pyin Oo Lwin is a training center for all governmental departments including Health Ministry. Though Suu Kyi’s government announced objectives of this training a fruitful and productive effort, lectures are similar to Nazism and Fascism. The Government spends for the training center 3000 million kyats annually.

British had to pay 60 billion $ to get out from European Union. As Saudi Arabia helps British to resign from EU, UK will never stand with Myanmar. Does Saudi stand with us or ARSA Bengali armed group? Think yourselves. Think how UK can use media in Rakhine issue. This is the situation of political economic. During the lecture some pictures were shown. On a picture it is written Myanmar’s Buddhism must be forever along with Buddhist religious flag. Another picture showed Russia doesn’t need minority, minority needs Russia with Putin picture.

Opinion of Dr. Soe Thuya Zaw as a trainee

According to Dr. Soe Thuya Zaw, the training included courses on financial management within government departments, political science, economics, English and information technology. While teaching the political science course, the lecturer advised the trainees not to marry or buy anything from non-Buddhist people and particularly referred to Muslim people, saying that they pose a risk to Myanmar’s monogamous Buddhists.

The persecution of the Jews began systematically almost as soon as Hitler came to power. The Nazis established many new anti-Jewish laws. These were introduced slowly at first, so that the civilian population would not realize the extent of the Nazi party’s anti-Semitism. It is uncertain whether Hitler planned to murder the Jews when he came to power. Originally it seems he intended to force them out of Germany but this eventually led to a plan to exterminate the Jews. Police and the courts no longer protect Jews. Jewish students excluded from exams in medicine, dentistry, pharmacy and law. Jews no longer allowed voting and lost German citizenship.

The persecution of Rohingya began systematically when General Ne Win came to power in 1962 through military coup. Ne Win introduced anti-Rohingya campaigns promoting Rakhine and restricting Rohingya. Genocidal operations against Rohingya were being implemented by military junta in 1990 and anti-Rohingya propaganda has been widely being spread after Central institute of civil service directed by General Khin Nyunt in Phaungyi.

Until Thein Sein era, Rohingya had right to vote and there were five Rohingya parliament constituency members during Thein administration. Daw Aung San Suu Kyi refused Muslim parliament members to be elected and Rohingya were not allowed to vote in 2015 election.

” During Suu Kyi’s administration, Rohingya face the worst atrocities of Myanmar military and they had to flee to Bangladesh to save their lives. Thousands of Rohingya including babies were murdered by Myanmar army inhumanely.

As two distinct laws passed in Nazi Germany in September 1935 are known collectively as the Nuremberg Laws: the Reich Citizenship Law and the Law for the Protection of German Blood and German Honor, Suu Kyi government also approved some Neo-Nazi laws.

The Monogamy Law was the last and the slimmest of four race and religion protection laws enacted after lobbying by nationalist Buddhist monks who claimed Myanmar and its women were under threat from Islam. According to Wirathu, the Monogamy Law was intended to preserve the sanctity of marriage, to safeguard from the danger of Muslims who are marrying many women in an effort to establish a Muslim nation, and for women to avoid the problem of polygamy.

Myanmar authority has granted extreme monk Wirathu full pledge right to abuse any international envoy or any religion as if he is a main organizer of Neo-Nazi policies in Myanmar. Recently, the Chief Minister of Yangon Region, strong NLD man, has honored extreme Neo-Nazi of Myanmar, e

Jews under Nazis’ Democracy and Rohingya...

A threat to democracy in Myanmar:...