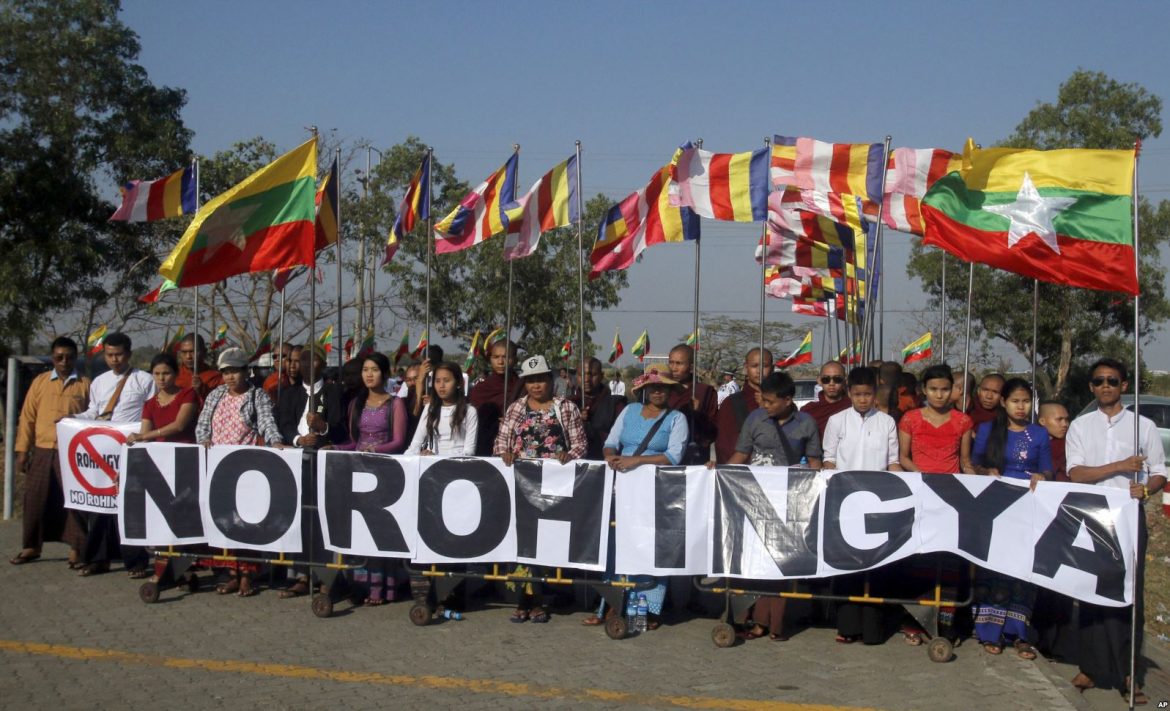 Genocidal plan to eliminate Rohingya was initiated after a brutal military regime seized power led by notorious dictator, general Ne Win in 1962. There were 144 official ethnic groups until 1974 in Burma and Rohingya was one of them. Later, Burmese regime announced the recognition of 135 official ethnics. The term Bengali has been being used for Rohingya by the State as a States genocidal plan.

United Nations has recorded that Rohingyas are the most persecuted ethnic group on Earth since 1970s. In 1978, Myanmar expelled more than four hundred thousand Rohingya to Bangladesh through genocidal operation called Dragon Operation.

Whenever international community urges Burmese Government to end persecution against Rohingya, it responses there is no Rohingya in Myanmar. State media has been spreading propaganda against Rohingya since 1970s.

Spreading the false allegations such as There is no Rohingya in Burmese history and illegal Bengali Muslim terrorists are invading Rakhine to make an Islamic State through States Media, Myanmar persuades majority Buddhists to eliminate Rohingya.

Myanmar, led by both its military and civilians, is engaged in genocide, a systematic slaughter of its Rohingya minority. Since August 2017, some 14,000 ethnic Rohingya have been killed. Seven hundred thousand have fled a terrifying brutality: babies stabbed to death or tossed alive into fires, grenades thrown through the front doors of homes, mothers gang-raped and slaughtered.

Instead of trying to stop Myanmar army’s atrocities against Rohingya, Aung San Suu Kyi denied the reality saying I don’t think there is ethnic cleansing going on. I think ethnic cleansing is too strong an expression to use for what is happening. She has questioned whether the Rohingya are even citizens of Burma.

Last month, Suu Kyi’s government sentenced seven of its soldiers to 10 years in prison for the killing of 10 Rohingya men in Inn Din village of Maungdaw last year. Two Reuters reporters, U Wa Lone and U Kyaw Soe Oo, who uncovered the slaughtering of Rohingya were arrested and charged for the country’s Official Secrets Act.

Britain’s U.N. envoy suggested the U.N. Security Council could consider helping Myanmar collect evidence of crimes committed during a military crackdown of the Rohingya people, denounced by the world body as ethnic cleansing after Myanmar army’s atrocities against Rohingya in 2017.

“There are two ways of doing that basically, one is an International Criminal Court referral, the second would be the Burmese government do that themselves,” Britain’s U.N. Ambassador Karen Pierce said.

Fleeing refugees have reported killings, rapes and arson. Data of U.N. Operational Satellite Applications Programme (UNOSAT) has shown hundreds of villages once inhabited by the Rohingya have now been burned down. But Suu Kyi’s government and army chief Min Aung Hlaing denied their atrocities and existence of Rohingya. As usual, they used the term Bengali as a deliberate concealment to cover up Rohingya Genocide.

Myanmar must announce Rohingyas existence officially and allow an independent, transparent and credible UN investigation into what has happened. Security Council could help Myanmar through U.N. investigative team to collect, preserve and store evidence of atrocities committed by Myanmar army.

Kenneth Roth, the executive director of Human Rights Watch suggested the Security Council to refer the situation to the International Criminal Court.

The crimes against humanity that were committed against the Rohingya population were clearly of the gravity and severity that they warrant prosecution by the ICC. If impunity were to prevail it would be an enormous injustice to the victims and their families, and it would only encourage a repetition of these kinds of mass atrocities, Roth said.

All foreign Embassies in Myanmar, the UN Security Council, International Community and Organizations should warn Myanmar government not to use Bengali for Rohingya in order to end Rohingya Genocide in Myanmar. Suu Kyi government is preparing to publish a book “Rohingya Never Exist in Burmese History“.