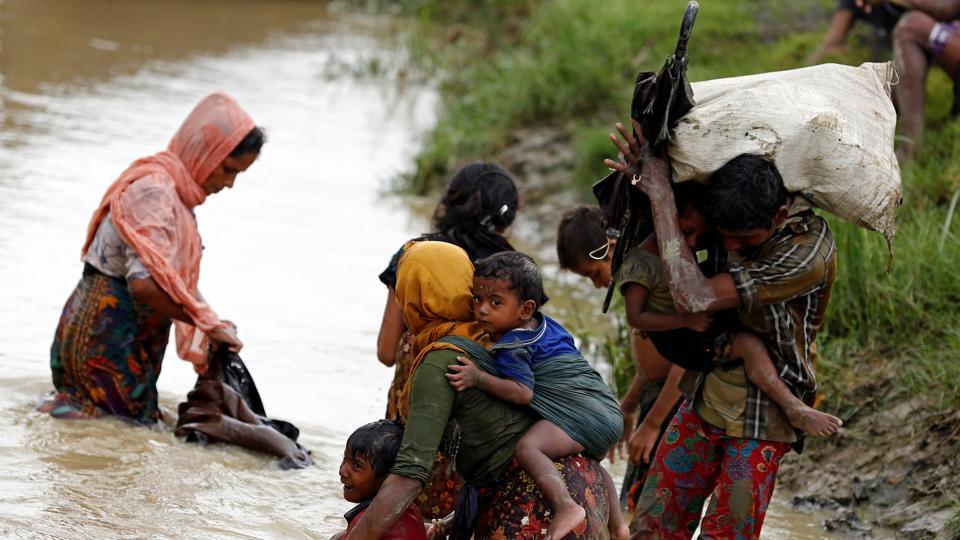 Aung San Suu Kyi, a Nobel Peace Prize winner, has been denying Rohingya and Rohingya Genocide in Arakan where villages are burned, women raped and children butchered, and babies thrown away or burnt alive.

Since 25 August 2017, Myanmar military, Border Guard Police and other security forces have been systematically slaughtering innocent Rohingya civilians including babies,forcing more than 280,000 to flee to neighboring Bangladesh.

“We have nothing to eat, our group has nearly 4000 people including babies and elderly persons. As our villages were burnt down by military, we ran wherever we see the way, we didn’t know where we are going. Many of us lost their family members. When we reached to this mountain path, we were exhausted and slept there without food on 7 September 2017.

In the morning, while we were looking for the way to reach Maungdaw, we saw military on one side waiting to kill us and on the other side, blood thirsty Rakhine ” said Abul Khair who is in the group fleeing from Pan Kine IDP camp of Rathedaung.

“My husband was killed. My brother-in-law and his whole family were slaughtered by military. I don’t know exactly how many people were killed. We came to TaungPro of Maungdaw after 12 days journey. It was a very difficult mountain path, very scary route, heartbroken time seeing children’s starvation, legs swollen, feel pain the whole body, no strength to continue the journey but to save children, I want to sacrifice my life. Thanks God, we reached Maungdaw. Sufwara Begun, a survivor from Hansa village of Buthidaung expressed her journey to Maungdaw.

Yale study had suggested that the brutality toward the Rohingya might qualify as genocide. The U.S. Holocaust Museum has also warned that a genocide against the Rohingya may be looming. Hundreds of Scholars have confirmed that “Rohingya Genocide taking place in Myanmar”

Hundreds of Rohingyas are believed to have been killed, but Aung San Suu Kyi, instead of visiting to the ground to see real situation with her own eyes or letting fair international media to get the reliable news, she criticized Rohingya and blamed international aid groups and complained about “a huge iceberg of misinformation” aiming to help “the terrorists”.

Who are real terrorists? Insurgents who attacked police posts and killed only seven security persons or Myanmar military who killed nearly thousands of Rohingya including babies and elderly people within two weeks and displaced more than 300,000 Rohingya?

Naturally, power is intoxicant but ignoring mass killing and denying genocide while it is currently happening, can be considered as atrocity. Whoever support genociders and the genocide denier are also committing crimes against humanity.